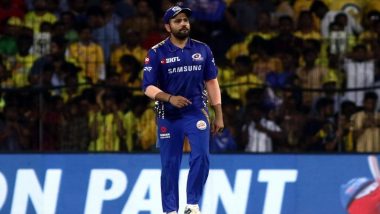 Rohit Sharma was trolled on social media after getting out for run-a-ball eight runs during Mumbai Indians vs Royal Challengers Bangalore IPL 2020 match. Rohit smashed a six during his eight-ball stay at the crease but failed to make a big score and was dismissed in the second over of Mumbai Indians’ chase against RCB in Indian Premier League season 13. The MI captain was out trying to hit Washington Sundar for a maximum in the fourth delivery of the second over of Mumbai Indians’ chase. RCB vs MI Live Score Updates Dream11 IPL 2020.

The team India white-ball cricket vice-captain started the chase well for Mumbai and scored a six off Isuru Udana’s first over. But he was out in the very next over after playing three consecutive dot balls in Sundar’s over. Mumbai Indians have been asked to chase 202 runs by RCB after the former had won the toss and asked Royal Challengers Bangalore to bat first. Take a look at some reactions. Virat Kohli Funny Memes Go Viral After RCB Captain’s Yet Another Poor Outing, Scores 3 off 11 Balls in RCB vs MI Dream11 IPL 2020.

Fans After Rohit Sharma Gets Out

People who made Rohit Sharma as a captain in Dream 11 #RCBvsMI pic.twitter.com/XOKCqarEX4

RCB Fans Trying to Get Rohit Out Under 30 Runs

Mumbai Indians Fans After Rohit Sharma Gets Out

(The above story first appeared on LatestLY on Sep 28, 2020 09:59 PM IST. For more news and updates on politics, world, sports, entertainment and lifestyle, log on to our website latestly.com).