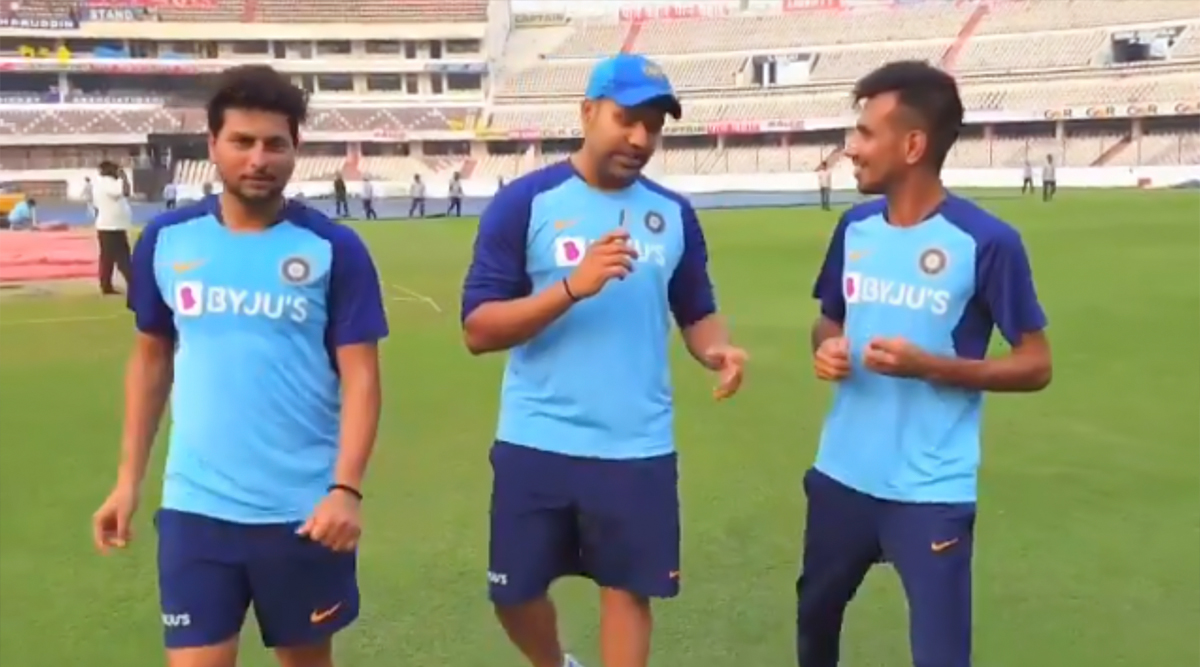 Yuzvendra Chahal and Kuldeep Yadav are two of the best spinners of India and become even more lethal when they joined forces. However, on this occasion, they were challenged by Rohit Sharma but off-field. Post India’s victory in the first T20I against West Indies, the Indian opener played a rapid-fire round with Kul-Cha and the duo made some interesting revelations. Both the spinners agreed on Shivam Dube being the worst dancer in the Indian team. While on being asked about one batsman they will not want to bowl to, Chahal took Rohit’s name in the Indian Premier League (IPL) whereas Kuldeep named Suryakumar Yadav. Virat Kohli Lashes Out at Spectators for Chanting MS Dhoni After Rishabh Pant Drops Evin Lewis' Catch.

The video was posted by BCCI in which the two spin bowling stars got candid with the Indian opener. On many fans have seen Chahal, himself, taking funny interviews of his teammates but, on this occasion, he was on the other side along with his bowling partner Kuldeep Yadav. Rohit asked some interesting questions and the duo didn’t shy in replying. According to Chahal, Mohammed Shami has the worst hairstyle in the Indian dressing room while Kuldeep took bowling coach Bharat Arun’s name. Virat Kohli Catch Video: Indian Captain Takes a Stunner to Dismiss Shimron Hetmyer During IND vs WI 1st T20I 2019.

MUST WATCH: Rapidfire ft. Kuldeep, Chahal and the HITMAN 😃😎

Both the cricketers were also asked to mimic one of their teammates, to which Chahal imitated Rohit only while Kuldeep hilariously mimicked Shami. In the end, Chahal asked Rohit about his clean-shaved face to which the latter replied that his daughter Samaira doesn’t like his beard. The conversation was certainly fun and is worth seeing for many Indian fans.

Speaking of the series, India clinched the opening encounter by six wickets while West Indies made an impeccable comeback in the succeeding encounter and registered an eight-wicket win. So, the series is perfectly poised at 1-1 and the deciding match will be played on December 11 at the Wankhade Stadium in Mumbai.