KL Rahul and Rashid Khan can be picked as the captain and vice-captain for your Dream11 Fantasy Team as they have been the consistent performers for their respective sides Punjab Kings and Sunrisers Hyderabad, so far in the competition. In this article, we shall also look at the probable playing XI for both the teams in this match. 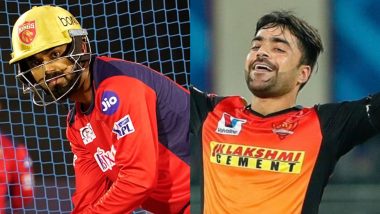 Sunrisers Hyderabad lock  horns with Punjab Kings in a IPL 2021 encounter at the Sharjah Cricket Stadium. The match would begin at 7:30 PM IST (Indian Standard Time). This would be clash between two underachievers in the competition. Despite possessing star players in their ranks, one can  rightfully say that they have not played to their potential at all and that turned out to sting both these sides. For Punjab Kings, a revival is what they were hoping and making a good progress towards after the IPL resumed but the ability to not finish off games haunted Anil Kumble's side, who somehow failed to chase down four runs in the final over. Yes, Rajasthan Royals' youngster Kartik Tyagi bowled a sensational over but with the likes of Deepak Hooda and Nicholas Pooran, they were expected to close the game and  win all two points. SRH vs PBKS Preview: Likely Playing XIs, Key Battles, Head to Head and Other Things You Need To Know About VIVO IPL 2021 Match 37

Sunrisers on the other hand, would derive little or no inspiration from their outing against Delhi Capitals. Thoroughly outplayed in all departments of the game, Kane Williamson's side would find it tough to lift themselves up and salvage something out of their dismal run so far. Dream11 fans and users would know how important the captain and vice-captain is for a side in the IPL. While the captain fetches double points, vice-captain multiplies the points x1.5 times. Here are the picks for captain and vice-captain for this match. SRH vs PBKS, Sharjah Weather, Rain Forecast and Pitch Report: Here’s How Weather Will Behave for Sunrisers Hyderabad vs Punjab Kings IPL 2021 Clash at Sharjah Cricket Stadium

KL Rahul has been one of the shining stars for Punjab Kings in their struggling campaign. The captain has led from the front, is second in the Orange Cap list with 380 runs. Though he missed out a deserved half-century in the last match, Punjab Kings would once again expect the right-hander to deliver with the bat and potentially, in a winning cause this time. IPL 2021 Points Table Updated

Sunrisers Hyderabad has had a campaign to forget so far but the same cannot be said for Rashid Khan, who has once again showed why he is such a valuable asset for any T20 side. The Afghanistan leg-spinner has scalped 11 wickets in the competition so far and can also deliver with the bat when his team requires. His handy 22 off 19 balls and figures of 1/26 was Sunrisers' best performance in their defeat to Rishabh Pant's Delhi Capitals in their last match and the star cricketer would once again potentially grab the headlines for his side.

(The above story first appeared on LatestLY on Sep 25, 2021 12:24 PM IST. For more news and updates on politics, world, sports, entertainment and lifestyle, log on to our website latestly.com).