SRH vs RCB Dream11 IPL 2020: Virat Kohli, David Warner and Other Players to Watch Out For in Indian Premier League Season 13 Match 3 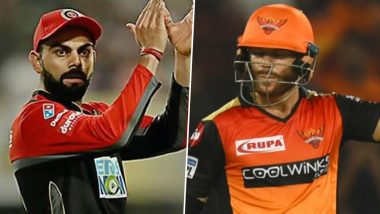 Sunrisers Hyderabad will take on Royal Challengers Bangalore in their opening fixture of Indian Premier League 2020. The clash will be played at the Dubai International Stadium on September 21, 2020 (Monday). Both teams have a great squad with several superstars and will have their eyes set on the elusive trophy come to the end of the season. Both sides will look to get the season underway in a positive manner with a win. SRH vs RCB, IPL 2020: Sunrisers Hyderabad Likely Playing XI vs Royal Challengers Bangalore for Indian Premier League Match 3.

Sunrisers Hyderabad appointed David Warner as their skipper ahead of the new season, the Australian will take over the duties from Kane Williamson, who led the side for last two seasons. Meanwhile, Royal Challengers Bangalore will be under the leadership of Virat Kohli and the Indian skipper will expect consistent performances from his side throughout the tournament. So before the teams face each other in Dubai, here are some players who could decide the outcome of the game. SRH vs RCB, IPL 2020: Royal Challengers Bangalore Likely Playing XI vs Sunrisers Hyderabad for Indian Premier League Match 3.

The Australian had a poor tour of England and struggled to make an impact in the T20Is, as well as OD, Is, so he will have a point to prove in the Indian Premier League. Warner arrived in UAE earlier this week and after serving mandatory quarantine period, he will be ready to take part in the game against RCB. He has a good record against Virat Kohli’s men and will look to continue that.

The Indian skipper will once again be one of the players to watch out in this year’s Indian Premier League. Kohli is the leading scorer in competition’s history and will hope to keep his form going and take his side to a maiden IPL trophy. Kohli last played in the series against New Zealand and was in poor form so he will be eager to make a statement.

The Afghanistan bowler will have a great role to play in today’s game and will have the job of keeping RCB skipper Virat Kohli in check. The Bangalore captain has a poor record against spin in recent years and Rashid Khan will look to take advantage of that. The 22-year-old is also a handy batsman and might need his batting prowess to get SRH out of a tricky situation.

The Australian comes into this game in great form and is expected to open the batting for RCB. Finch looked brilliant in the T20Is against England scoring 125 runs in three matches. His form at the top of the order will be cruciual in this game as well as the entire tournament for the Bangalore franchise.

(The above story first appeared on LatestLY on Sep 21, 2020 07:00 AM IST. For more news and updates on politics, world, sports, entertainment and lifestyle, log on to our website latestly.com).