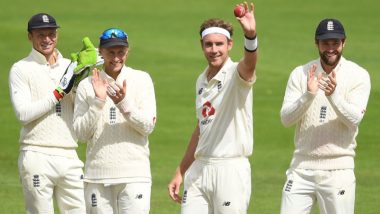 Stuart Broad became the seventh and latest bowler to scalp 500 Test wickets. The fast-bowler achieved the feat against West Indies on day five of third and final Test at the Old Trafford Cricket Ground in Manchester. Broad removed West Indies opener Kraigg Brathwaite to complete the milestone. Interestingly, Brathwaite was James Anderson’s 500th victim as well. Anderson and Broad are the only England bowlers with 500 or more wickets in Tests. Stuart Broad Becomes Seventh Bowler to Take 500 Wickets in Test Cricket, Second England Pacer After James Anderson to Achieve the Feat.

Sri Lanka’s Muttiah Muralitharan tops the list of bowlers with most wickets in Tests with 800 scalps. Shane Warne (708), Anil Kumble (619), Anderson (589), Glen McGrath (563) and Courtney Walsh (519) are ahead of Broad on this list. Broad, who was dropped for the first Test against Windies, is now the leading wicket-taker in the three-match series. ENG vs WI 3rd Test Day 5 Live Score Updates.

He has had a good outing at the Old Trafford in the third Test as he picked 6/31 in Windies’ first innings to get close to the 500th Test wicket. In West Indies second innings, Broad has thus far picked three wickets. As the 34-year-old, joined the elite list of bowlers with 500 or more Test wickets; Twitter was abuzz with reactions.

Congratulations 🎉 @StuartBroad8 for your 500 test wicket , being hit for six sixes in so young age than taking 500 wicket remarkable achievement #ENGvsWI #500

Well played @StuartBroad8 reaching 500 Test wickets. Pleased to say I saw your first in Colombo in 2007, my first overseas Test too

Two bowlers with 500 Test wickets in the same team:

Not just with the ball, Broad scored valuable 62 off 45 balls in the first innings of the third Test, and that helped England go past the 350-run mark. After posting 369, England bowled out West Indies for 197. In the second innings, England declared on 226/2 and with the help of 172-run lead, set Windies a target of 399.

(The above story first appeared on LatestLY on Jul 28, 2020 05:26 PM IST. For more news and updates on politics, world, sports, entertainment and lifestyle, log on to our website latestly.com).