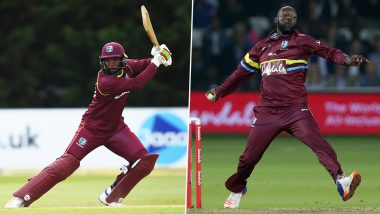 Cricket fans are set to witness some great contest between the bat and the ball as Vincy Premier T10 League 2020 is set to get underway from Friday (May 22). As many as six Caribbean-based teams - Botanic Gardens Rangers, Dark View Explorers, Fort Charlotte Strikers, Grenadine Divers, La Soufriere Hikers and Salt Pond Breakers- will participate in the tournament. The T10 league, which is being hosted by St Vincent and the Grenadines Cricket Association, will be played at the Arnos Vale Sporting Complex at St Vincent. Meanwhile, cricket fanatics can scroll down to get the full schedule of Vincy Premier T10 League 2020 with Indian Standard Time (IST). Download Vincy Premier T10 League 2020 Schedule For Free in PDF Format.

12 players have been allotted to all the six teams participating in the tournament. The likes of Andre Russell might not be featuring in the tournament. However, one can still witness three big names in the T10 league. Kesrick Williams, Obed McCoy and Sunil Ambris are the marquee players of three teams. The tournament will run for 10 days and will end on May 31. The top four teams of the tournament will play the semi-finals and subsequently, the finalists and the winner will be decided. Now, let’s have a look at the schedule.

(The above story first appeared on LatestLY on May 20, 2020 10:38 PM IST. For more news and updates on politics, world, sports, entertainment and lifestyle, log on to our website latestly.com).