Virat Kohli is set to return back to India at the conclusion of first India vs Australia Test, which starts on December 17. He will have to be in self-isolation for 14 days before he can rejoin his wife. His decision to leave the cricket team garnered a wide audience with the many praising him for not forgetting his family responsibilities. 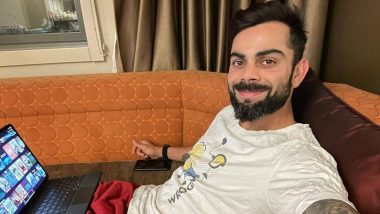 Virat Kohli recently opened up on his decision to leave Australia mid-tour for the birth of his first child. Kohli will leave Australia after the first Test in Adelaide on December 21 and will return home to India to be present for the birth of his first child. The India captain revealed the reason behind his decision to leave the team mid-way through the tour and said he ‘wanted to be present beside his wife’ for the birth of their first child and live the beautiful moment. Kohli and Anushka Sharma are expecting their first child in January. Virat Kohli Fires Warning to Aaron Finch & Men Ahead of 1st ODI 2020, Slams Towering Sixes in the Nets (Watch Video).

The couple announced their pregnancy on August 27 and are expecting the child to be born in January. Kohli is set to return back to India at the conclusion of first India vs Australia Test, which starts on December 17. He will have to be in self-isolation for 14 days after reaching India before he can rejoin his wife. His decision to leave the cricket team garnered a wide audience with the many praising the 32-year-old for not forgetting his family responsibilities while a section of fans also hit out at the India skipper for his decision. Virat Kohli 3D AR Filter Will Enable Fans to Recreate Indian Captain’s Memorable Celebration and Share on Instagram, Facebook.

Kohli spoke about his decision to fly back to India in an interview with BCCI and revealed the reason behind him taking the call. “I'd be flying back after the first Test and that was purely based on the fact we had quarantine period both ways. I had explained the same to the selectors during our selection meeting,” he said in the short video clip shared on Indian cricket team’s official social media handles.

“I wanted to be back home in time to be with my wife for the birth of our first child. It’s a very very special and a beautiful moment in our lives and something I truly want to experience. So that was the reason behind by my decision which was communicated to the selectors during the selection meeting,” he added. Take a look at the video.

Virat Kohli on Reason Behind Decision to Return to India

Kohli, meanwhile, will lead India out for the ODI series against Australia starting November 27. Kohli’s men had won both the ODI and Test series when India last toured Australia in 2018 and they will hope to replicate the same performance this time. Kohli and India will be playing their first international fixture after an eight months gap due to the coronavirus pandemic.

(The above story first appeared on LatestLY on Nov 26, 2020 11:33 PM IST. For more news and updates on politics, world, sports, entertainment and lifestyle, log on to our website latestly.com).