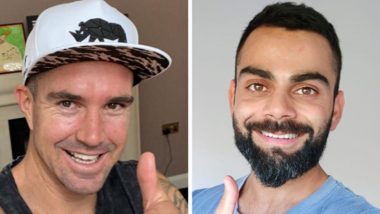 As most of the world is forced to self-quarantine amid the coronavirus pandemic outbreak, former England cricketer Kevin Pietersen has found a good time to interview fellow cricketers. After Indian opener Rohit Sharma and Pakistan cricket Ahmed Shehzad, KP joined Indian cricket team captain Virat Kohli for a live interview on Instagram. Ahead of the interview, KP took to Instagram and wrote, “Tomorrow at 7pm IST I’m chatting to my buddy @virat.kohli LIVE on here. Talking about the good old days & why he ALWAYS keeps reminding me that he got me out. This YOU won’t want to miss!” Virat Kohli and Anushka Sharma’s Latest Pictures on Instagram Will Give You Major Couple Goals During Quarantine.

Meanwhile, during the live interview session, KP asked Kohli Why has Royal Challengers Bangalore (RCB) not won an Indian Premier League (IPL) title? To which, the RCB captain replied, “Big players in the team, there will be attention on the team. With big players, we will always be in the focus. We have reached three finals, not won, but then, those things are irrelevant, until you win the title. Even with the best team, we have not win. There is a team goal, we deserve to win the title.”

Kohli then added that RCB needs to bring back joy in the team and try not to set goals. “I think the more you try to do something, it tends to move away from you. I think we need to get the joy back into the team and not try and look to set goals,” the Indian cricketer added.

Interestingly, Pietersen was part of RCB as well and was named as captain of the team for 2009 season. KP, however, after leading Royal Challengers in six matches, was replaced by Anil Kumble as skipper.

(The above story first appeared on LatestLY on Apr 02, 2020 07:51 PM IST. For more news and updates on politics, world, sports, entertainment and lifestyle, log on to our website latestly.com).