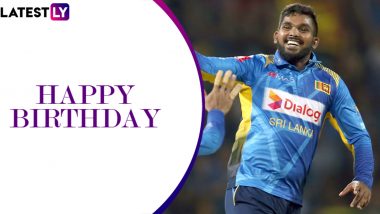 Sri Lanka leg-spinner Wanindu Hasaranga celebrates his 23rd birthday on Wednesday (July 29, 2020). Hailing from Galle, Hasaranga is a well-equipped spinner along with being a handy batsman lower down the down. The youngster is not a huge turner of the ball but his ability to bowl accurately and knack of playing with bowler’s mind makes him a force to reckon with. The bowler doesn’t give many run-scoring chances which force the batsmen to commit a mistake. Also, opposition teams can’t afford his ability to hit the ball a long way in the end overs. Below, we’ll revisit some of his best performances. This Day That Year: Muttiah Muralitharan Becomes First Bowler to Take 800 Test Wickets.

Hasaranga made a dream start to his international career as he claimed a hat-trick in his ODI debut against Zimbabwe. However, he wasn’t able to cement his place in the team due to the presence of Akila Dananjaya and Dhananjaya de Silva. Nevertheless, he made a comeback in the side in 2019 and since then, has been a regular part of Sri Lanka’s white-ball set-up. So far, the spinner has claimed 17 and 16 wickets from 15 ODIs and 12 T20Is. Well, these are still early days for the youngster in international cricket but he looks like a great prospect for the future. As the talented Sri Lankan spinner turns a year older, let’s look back at some of his best performances.

The leggie bowled a sensational spell on his ODI debut and announced his arrival in style. During the second ODI of Zimbabwe’s 2017 Tour of Sri Lanka, Hasaranga ran through the visitor’s lower order and claimed a brilliant hat-trick. Courtesy his stellar spell, Zimbabwe were bundled out for 155 runs while batting first. The home team didn’t face much trouble while chasing the target as they won the game by seven wickets.

3/30 Vs West Indies In Hambantota

Another Wanindu Hasaranga special was seen in the 2nd ODI of West Indies’ 2020 Tour of Sri Lanka. Batting first, Sri Lanka posted a mammoth total of 345-8 and the track looked ideal for batting. However, that wasn’t the case when the Caribbean team came on to bat. The leggie dismissed the likes of Darren Bravo and skipper Kieron Pollard as Sri Lanka won the game by 161 runs.

The young leg-spinner enjoyed a sensational run during Sri Lanka’s 2019 Tour of Pakistan. However, his best performance in the series came in the 2nd T20I. The visitors could only post 147-7 and their defeat looked set on the cards. However, Hasaranga had different ideas as he bowled a stellar spell. Courtesy his three-wicket haul, the home team was restricted to 134-6 and Sri Lanka won the game by 13 runs.

(The above story first appeared on LatestLY on Jul 29, 2020 08:00 AM IST. For more news and updates on politics, world, sports, entertainment and lifestyle, log on to our website latestly.com).