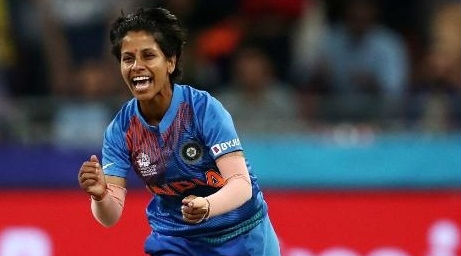 Her performance in the World Cup opener was also remarkable considering the fact that she was making a return from a fractured finger. Injured during a pre-tournament camp, the leg-spinner's World Cup place was thrown into doubt. She missed the preparatory tri-series involving England as well. ICC Women’s T20 World Cup 2020 Time Table & Schedule in IST for Free PDF Download Online: Check Fixture Dates, Match Timings, Venue Details of Twenty20 CWC in Australia.

"I did not know myself it would turn out to be this bad," the leg-spinner said. "After the injury I focused on the diet and on fitness. "I was confident I could bowl at any time. Raman Sir (WV Raman, India head coach) asked if I was mentally ready.

"I told him mentally I was, but it was also necessary for me to be physically prepared. "Within myself I had the belief I would make the comeback in time. The good thing is I got hurt about one-and-a-half months before the World Cup. "God is great - whatever bad had to happen has already happened."

How India needed their star leg-spinner to shine with Australia cruising at 58 for two when Poonam was introduced in the ninth over, skipper Harmanpreet Kaur holding her back as long as possible. Alyssa Healy, back to form with 51, took a liking to the leg-spinner's full-toss but next ball she perished, a 63kph leg-break punched back to the bowler.

Even then, 66 required off the final 10 with seven wickets in hand, the defending champions looked comfortable and assured. But Poonam is not India's leading WT20I wicket-taker for nothing, her final three overs captivated the 13,432 in place at the Sydney Showground, every ball an event in itself.

Ashleigh Gardner belted ball No.7 for four but thereon the 4-feet 11 inches tall Indian spinner took over, Rachael Haynes deceived in flight to be stumped before Ellyse Perry was duped by a wrong'un, bowled first ball.

Had the ball stuck in Tanya Bhatia's hand then the leg-spinner would have had a well-deserved hat-trick, only that it wasn't meant to be. Jess Jonassen was the fourth and final victim, a thin edge seeing Tania atone, with the pain Poonam felt on a fully-bandaged finger replaced solely by adrenaline.

With a small stature and desire to float the ball high, her style is not a replicable one in the women's game - with Healy admitting that while Australia had preparation, they lacked execution.

Credit should also be given to captain Kaur. Defending 132 looked a tough ask, and the Indian skipper would've been tempted to bring her star spinner on earlier in proceedings.

But she held Poonam till the ninth over and it paid dividends as Australia were eventually bundled out for 115 in the final over as they were answerless to her wrong'un, one change-up was all that was needed to complete a stunning start to the T20 World Cup. You can also download the ICC Women's T20 World Cup 2020 Full Schedule PDF for free.

India face Bangladesh in their next Group A match on Monday and would be hoping that Poonam replicates the performance she put out against the four-time champions and proceed to their first-ever ICC title.