The two Pakistani boxers, Nazeer Ullah and Suleman Baloch, have not boarded the return flight and have not contacted the officials. The Pakistan Olympic Association have urged the UK police and CWG authority to find the athletes. 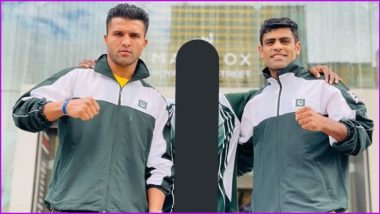 Two Pakistani boxers named Nazeer Ullah and Suleman Baloch, who participated in the Commonwealth Games 2022 in Birmingham, have gone missing after the end of the multi-sports event. The boxers were to return to Pakistan straight from England, but the Pakistani management have lost contacts with them. According to Dawn, the Pakistan Boxing Federation (PBF) have confirmed that their two athletes have not reported to the management of the national contingent. The 22nd edition of the Commonwealth Games have been finished on August 8 after an action-packed 11 days. Pakistan At Commonwealth Games 2022 Medal Tally Live Updated: Arshad Nadeem Captures Gold Medal in Javelin Throw; Pakistan in 18th Spot on Medal Table

Pakistan Boxing officials has lounge an official Police complain in 🇬🇧 police, as its 2 boxers slipped some where just 2 hours before leaving for airport, their travel documents are also with boxing officials. This is gonna very much serious issue as both were there to play CWG. pic.twitter.com/KahqoW79Cj

According to reports, Nazeer Ullah and Suleman Baloch, two boxers from Pakistan have not reported to the team management before the scheduled departure from Birmingham. The boxers' documents are with the Pakistani authority despite not boarding the flight back home.  According to Dawn, the Pakistani Olympic Association have approached to the Commonwealth Games authorities to help them find the missing boxers. Secretary of Boxing Federation Nasir Tang told Dawn.com: “We have seized the documents of the duo under the standard operating procedure." Meanwhile, the UK police and CWG management are yet to launch an investigation on the missing case.

(The above story first appeared on LatestLY on Aug 10, 2022 08:19 PM IST. For more news and updates on politics, world, sports, entertainment and lifestyle, log on to our website latestly.com).