Regional supremacy and Continental glory will be on the line for clubs throughout Asia when the AFC Cup 2022 Group Stage commences on Wednesday (May 18). 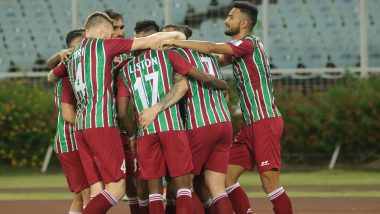 Kolkata, May 16: Regional supremacy and Continental glory will be on the line for clubs throughout Asia when the AFC Cup 2022 Group Stage commences on Wednesday (May 18). Held in a series of centralised hubs, the South and West Zones of the competition will kick off the 2022 edition, with the Central, East, and ASEAN Zones to follow suit from June 24 to 30. Robert Lewandowski Transfer News: Chelsea Show Interest To Sign Bayern Munich Star.

The AFC Cup 2022 will feature a total of 38 teams spread across 10 groups, all competing to lift the coveted club crown in the eagerly-anticipated Final on October 22. The Group Stage action begins in Kolkata, where local and Group D contenders ATK Mohun Bagan FC will face Gokulam Kerala FC at the Vivekananda Yuba Bharati Krirangan Stadium before Maziya Sports & Recreation of the Maldives take on Bangladesh Premier League champions Bashundhara Kings at the same venue four hours later.

In the traditionally strong West Zone, the Muscat-based Group A will 'ee Oman's Al Seeb Club open their campaign against Jableh of Syria at the Al-Seeb Stadium before'Lebanon's Al Ansar battle Kuwait SC later in the night. Meanwhile, the Group B, located in Kuwait City, will pit hosts Arabi SC again't Bahrain's Al Riffa at the Kuwait Sports Club Stadium in the evening before Shabab Al Khalil of Palestine face off against Dhofar Club of Oman at the same venue later in the night, according to a release issued by the Asian Football Confederation. Kylian Mbappe Transfer News: Real Madrid Reportedly Complete Deal To Sign Young French Star From PSG.

Group C, based in Bahrain, will see a captivating opener between Tishreen of Syria and Palestinian club Hilal Alquds at the Al Muharraq Stadium at 6pm before hosts East Riffa, who will be hoping to follow in the footsteps of their compatriots and 2021 champions Muharraq Club, take on Nejmeh SC from Lebanon at 10pm. Dushanbe and Bishkek will host Groups E and F respectively when the Central Zone kicks off on June 24, while Bali United FC, Kuala Lumpur City FC and Viettel FC will all enjoy home advantage in their respective ASEAN Zone groups, with'the East Zone's Group J to be held on neutral territory in Buriram, Thailand.

In addition to the chance to claim Continental glory, there is substantial prize money on offer in the AFC Cup 2022, with the winners getting USD 1.5million, while the runners-up take home USD750,000. Held for the first time in 2004, the AFC Cup has provided access to top-level competition for clubs from throughout the Continent and consistently produced thrilling action, with teams from seven different nations lifting the trophy since 2010.

(The above story first appeared on LatestLY on May 17, 2022 10:23 AM IST. For more news and updates on politics, world, sports, entertainment and lifestyle, log on to our website latestly.com).