Bruno Fernandes, Marcus Rashford, Paul Pogba & Other Members of Manchester United Sweat It Out Ahead of Europa League 2020-21 Finals Against Villareal (See Pics) 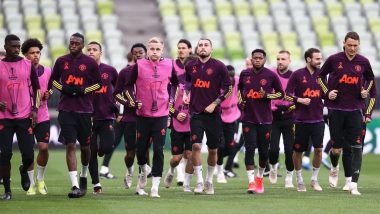 Manchester United has reached the finals of Europa League 2020-21 and is all set to face Villareal at the Stadion Energa Gdansk. Needless to say that the Manchester United players are all set to put their best foot forward in the final event. Bruno Fernandes, Marcus Rashford, Paul Pogba and others were seen sweating it out in the stadium ahead of the final event. The pictures of the team working hard were shared on social media. So this will be Ole Gunnar Solskjaer's first attempt to win the trophy. Solskjaer joined the Red Devils in 2018.  The team this year did quite well under Ole. MU vs VIL Dream11 Prediction in UEL Final 2020–21: Tips To Pick Best Team for Manchester United vs Villareal Football Match.

In the EPL 2020-21, the Red Devils ended the season being in the top four. Manchester United was placed on number two of the points table. Whereas on the other hand, Villareal has reached the finals for the first time. Manchester United and Villareal are having a face-off with each other for the fifth time and they have been crowned as champions five times.

Now, let's have a look at the pictures shared by Manchester United:

Head to the #MUFC app now for 𝙡𝙞𝙫𝙚 coverage of our final training session before the final! 💪#UELfinal

"You always feel pressure to win things at Manchester United. Progress in the league shows progress. The next step is to win trophies and challenge in the Premier League as well," said Solskjaear in the pre-match conference. The match will begin at 12.30 am IST.

(The above story first appeared on LatestLY on May 26, 2021 12:56 PM IST. For more news and updates on politics, world, sports, entertainment and lifestyle, log on to our website latestly.com).