Cristiano Ronaldo and Bipasha Basu’s Pictures From 2007 Event Leaves Fans Surprised; Netizens Ask ‘Did They Really Had a Thing’ 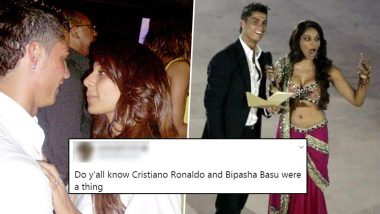 Rumours of Sportsters and Bollywood actors dating are common in the Indian circles. Many sportspersons, like MS Dhoni, Yuvraj Singh, Sania Mirza, have been linked with several Bollywood actors in the past. Some, like Mahesh Bhupati-Lara Dutta, Yuvraj Singh-Hazel Keech and Virat Kohli-Anushka Sharma, even tied the knot. But among them all, the link-up that left fans shocked and surprised was Cristiano Ronaldo and Bipasha Basu’s dating rumours. Pictures of the pair from 2007 have resurfaced on the internet once again and fans can’t stop talking about how it started. Missing the Ocean? These Sizzling Photos of Cristiano Ronaldo's Girlfriend Georgina Rodríguez in Bikini Won't Help But Too Hot to Ignore!

Ronaldo and Bipasha’s alleged dating made headlines in 2007 and both stars were also questioned about their interest in each other. Both had then downplayed it. But, on Thursday, some pictures from their meeting have resurfaced and left fans confused. Bipasha and Ronaldo had met during a function at Lisbon’s Luz Stadium to announce the new Seven Wonders of the World. Post the ceremony, the pair had reportedly attended a party and even got cosy with each other. Cristiano Ronaldo Showcases His Love for Girlfriend Georgina Rodriguez in Latest Instagram Post.

Wait what! Ronaldo and Bipasha were a thing? #Ronaldo pic.twitter.com/qxrLwrJPuJ

Another Picture of the Pair From 2007 Resurfaced

So i was today year old when i came to know that Ronaldo and Bipasha were a thing, I can't breathe !! pic.twitter.com/xR89uSFAOO

Some pictures allegedly clicked from the party show the pair kissing each other. Those pictures resurfaced on the internet on Thursday and fans were left confused as many were unaware of such link-up between Bipasha and Cristiano Ronaldo. Take a look at some reactions from the fans.

Fans Were Unaware of Any Such Development

Was I living under a rock or what!!

This Fan Just Found Out Today

Thursday Breaking News for This Fan

Just found out Ronaldo and Bipasha Basu were a thing

Were They A Real Thing?

Whattt ronaldo and bipasha basu were a thing?? R u serious rn !?

How Did This Happen?

This Fan Found the Correct Answer

Bipasha had later stated Ronaldo was a friend and that both found each other cute. She had also mentioned that she planned to watch some matches of the Juventus star in the future. Today, Bipasha is married to actor Karan Singh Grover while Ronaldo is currently in a relationship with Georgina Rodriguez.

(The above story first appeared on LatestLY on Jul 23, 2020 10:48 PM IST. For more news and updates on politics, world, sports, entertainment and lifestyle, log on to our website latestly.com).