Ronaldo appeared to knock a phone from a fan's hand as he was going into the dressing room following Manchester United's defeat to Everton in the Premier League on Saturday. Manchester United lost 1-0 following Anthony Gordon's first-half strike. 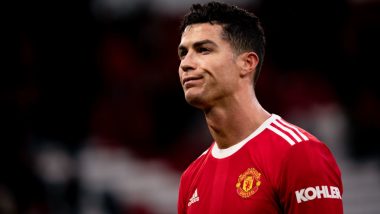 Cristiano Ronaldo's incident of breaking a fan's phone on his way to the dressing room following Manchester United's match against Everton has prompted the police to investigate the issue. A frustrated Ronaldo, who also seemed injured, swiped down a phone from a fan's hand as he made his way back to the dressing room--the video of the incident going viral ever since. According to ESPN, the Merseyside police have opened an investigation into this incident. Video of Cristiano Ronaldo Smashing Fan's Phone After Manchester United's Defeat Against Everton Goes Viral

The video showed Ronaldo swiping his hand at the ground but eye-witnesses have said that he actually ended up tossing a fan's phone with his action. The Portuguese star was quick to issue an apology for his actions. Taking to Instagram, Ronaldo wrote, "

"It's never easy to deal with emotions in difficult moments such as the one we are facing. Nevertheless, we always have to be respectful, patient and set the example for all the youngsters who love the beautiful game. I would like to apologise for my outburst and, if possible, I would like to invite this supporter to watch a game at Old Trafford as a sign of fair play and sportsmanship." Cristiano Ronaldo Issues Apology After Smashing Fan’s Phone, Read Full Statement

A spokesperson of the Merseyside police, as quoted by ESPN, said, "As players were leaving the pitch at 2.30 p.m., it was reported that a boy was assaulted by one of the away team as they left the pitch. Inquiries are underway and officers are working with Everton Football Club to review CCTV footage and are carrying out extensive witness enquiries to establish if an offence has taken place." Manchester United are also reportedly looking into the incident.

Ronaldo appeared upset after Manchester United crashed to a 1-0 defeat to Everton at Goodison Park. The defeat not only dealt a massive blow to Manchester United's hopes of qualifying for the Champions League but has also prompted speculations to arise about Ronaldo's future at the club beyond this season.

(The above story first appeared on LatestLY on Apr 11, 2022 12:22 PM IST. For more news and updates on politics, world, sports, entertainment and lifestyle, log on to our website latestly.com).