The third day of this competition saw some interesting clashes and now we would witness teams like former champions Spain, Czech Republic, Scotland, Sweden, Slovakia, and dark horses Poland in action. England beat Croatia, Austria defeated North Macedonia and the Netherlands outsmarted Ukraine in their matches on the second day. 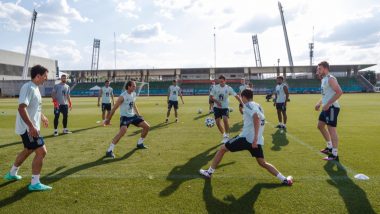 Euro 2020 has had an eventful start and we are already on to the fourth day of the tournament. The third day of this competition saw some interesting clashes and now we would witness teams like former champions Spain, Czech Republic, Scotland, Sweden, Slovakia and dark horses Poland in action. Take a look at the matches on the fourth day along with the venue and timings mentioned in IST (Indian Standard Time).  UEFA Euro 2020 Points Table Updated

England, for the first time in European Championships, won their opening match and they did so comfortably, beating 2018 World Cup finalists Croatia. Raheem Sterling's strike in the 57th minute was enough to give Gareth Southgate's men a flying start to the competition. Austria overcame a challenge from debutants North Macedonia while the Netherlands edged past Ukraine 3-2, in what could essentially be called the most dramatic match so far in the European competition.

Scotland vs the Czech Republic

On June 15, defending champions Portugal would begin their Euro 2020 campaign against Hungary at the Puskas Arena.

Austria and England, who won their matches against North Macedonia and Croatia respectively, are the table-toppers of Group C and D respectively. The Netherlands, with a win over Ukraine, are second-placed in Group C. Italy and Belgium, who too had secured victories in their opening matches, sit at the top of Group A and Group B.

(The above story first appeared on LatestLY on Jun 14, 2021 12:06 PM IST. For more news and updates on politics, world, sports, entertainment and lifestyle, log on to our website latestly.com).