George Floyd's Death in US: Paul Pogba, Manchester United's Central Midfielder, Voices His Anger; Urges Everyone to Speak Out 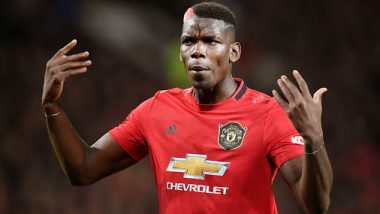 Manchester, June 2: Manchester United playmaker Paul Pogba has voiced his anger and urged everyone to speak out on George Floyd's death that has caused a massive outrage in the United States.

Floyd, aged 46, died last week shortly after Derek Chauvin, a police officer, held him down with a knee on his neck though he repeatedly pleaded, "I can't breathe," and "please, I can't breathe".

Pogba took to Instagram to express his sadness over Floyd's death and revealed racism is prevalent everywhere. He also stated that targetted attack on one community cannot be tolerated anymore and for that to happen, everyone needs to speak up.

"During the past few days I have thought a lot about how to express my feelings about what happened in Minneapolis," the Frenchman wrote on his Instagram handle.

"I felt anger, pity, hatred, indignation, pain, sadness. Sadness for George and for all black people who suffer from racism EVERY DAY! Whether in football, at work, at school, ANYWHERE!

"This has to stop, once and for all! Not tomorrow or the next day, it has to end TODAY! Violent acts of racism can no longer be tolerated. I can't tolerate. I won't tolerate. WE WON'T TOLERATE. Racism is ignorance. LOVE is intelligence. STOP the silence. STOP racism."

Earlier, Pogba' Manchester United teammate Marcus Rashford had sent out a similar message and had also used social media to voice his anger.

"I know you guys haven't heard from me in a few days. I've been trying to process what is going on in the world," he had said in a Twitter post on Monday.

"At a time I've been asking people to come together, work together and be united, we appear to me more divided than ever. People are hurting and people need answers.

Sancho, who netted a hat-trick in the game, revealed 'Justice for George Floyd' message on his t-shirt which was broadcast around the world.

Former Manchester United and England captain David Beckham also posted a moving tribute for Floyd on Instagram: "My heart goes out to George's family and I stand in solidarity with the black community and millions of others across the world who are outraged by these events. Its heartbreaking to see that in 2020 this is still happening."

(The above story first appeared on LatestLY on Jun 02, 2020 02:25 PM IST. For more news and updates on politics, world, sports, entertainment and lifestyle, log on to our website latestly.com).