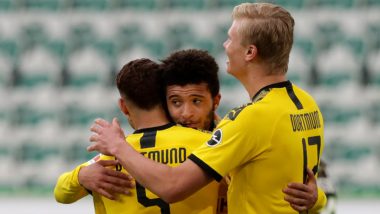 Bundesliga Live Streaming Online in India: Borussia Dortmund and RB Leipzig clash in what promises to be a thrill a minute encounter between two vastly attacking teams. Second-placed Borussia Dortmund ceded the title to Bayern Munich and have been in a bit of slump since losing to the Bavarians a few weeks back. Although they are sure to make it to the Champions League next season, third-placed RB Leipzig could go level with them on points if they lose today. With one win in their last three, Leipzig are not in god form either which raise question marks over their ability to get the better of Dortmund. LEP vs DOR Dream11 Prediction in Bundesliga 2019–20: Tips to Pick Best Team for RB Leipzig vs Borussia Dortmund Football Match.

RB Leipzig star Timo Werner plays his last home game for the club as he prepares for a move to England with Chelsea. The German international made a huge name for himself at Leipzig which prompted a race of sorts for his signature. Partnering him in the forward line will be Patrik Schick. Dani Olmo has been in good form off late for the hosts and could pose a threat for the travelling Dortmund team with his playmaking skills.

Mateu Morey replaces the impeccable Achraf Hakimi in the starting eleven with the latter being suspended for the contest. Leonardo Balerdi will likely come in for Manuel Akanji, who is injured. Jadon Sancho and Julian Brandt should flank Norwegian international Erling Haaland in the attacking third for Dortmund. Nico Shulz has not got much game time under Lucian Favre, and the full-back is pushing for a start against RB Leipzig.

Free live streaming of RB Leipzig v Borussia Dortmund match will be available on Disney+ Hotstar, which is OTT platform of Star Network. Fans can tune into the Hotstar app and watch the match live or log into hotstar.com and catch the live-action. The two teams have some quality creative players in their ranks, and there should be goals in this contest. The home side might just edge out Borussia Dortmund in the end.

(The above story first appeared on LatestLY on Jun 20, 2020 03:10 PM IST. For more news and updates on politics, world, sports, entertainment and lifestyle, log on to our website latestly.com).