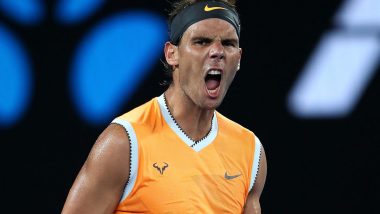 Beijing, June 5: Rafael Nadal has insisted that tennis "cannot resume until the situation is completely safe", adding that he would not take part in the US Open if the Grand Slam tournament was being played this week. The world number two, who won his fourth US Open and 19th Grand Slam at last year's event, said he remained convinced the COVID-19 pandemic still casts huge doubts over the tennis calendar which has been suspended since mid-March, reports Xinhua news agency.

"We cannot resume until the situation is completely safe and fair in terms of health in that all players, wherever they come from, can travel and play tournaments in safe conditions," Nadal told reporters in a video conference call. "If you told me to play the US Open (scheduled to start on August 24) today, I would say no." Rafael Nadal Quotes With Images: 10 Powerful Sayings by the King of Clay That Can Have a Great Impact on Your Life.

"We have to wait for people to return to normal life. And when it does, wait to see how the virus evolves and how the situation is going to be in New York in a couple of months. Because, of course, New York has been one of the places that have been very strongly hit by the virus. So let's see."

The ATP and WTA schedules have been suspended since March, with action not set to resume until the end of July at the earliest. Wimbledon was cancelled for the first time since the Second World War, while the French Open has been shifted to September.

The US Open remains on schedule but there are doubts over whether or not it should take place, with New York being the epicenter of the COVID-19 crisis in the United States. "I miss playing tennis. I miss playing the tournament that I love the most," Nadal said. "But at the same time, my mind is not thinking about that. My mind is focused on trying to recover the normal life. The first thing we have to do is recover the normal."

(The above story first appeared on LatestLY on Jun 05, 2020 11:28 PM IST. For more news and updates on politics, world, sports, entertainment and lifestyle, log on to our website latestly.com).