If we are to look at records, head-to-head clashes between these players show that Djokovic holds a slight advantage with 29 wins as compared to Nadal's 28. Based on their last five matches, Nadal holds the advantage over his Serbian rival, winning three and would soon hope at securing a 21st Grand Slam. 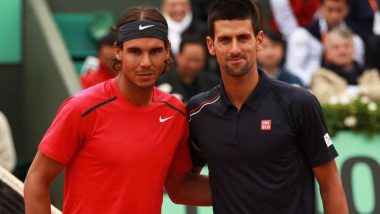 Rafael Nadal vs Roger Federer. French Open 2021 semi-final. Multiple records at stake. It really doesn't get any better, does it? On June 11 at the Phillipe-Chatrier court, we would witness two absolute beasts of modern-day tennis, take on each other, vying for greatness. If we are to look at records, head-to-head clashes between these players show that Djokovic holds a slight advantage with 29 wins as compared to Nadal's 28. This is also the record 58th time that these two titans of the game are competing with each other. If Nadal wins, he would move one inch closer to winning a record 21st Grand Slam title. But if Djokovic emerges the victor, he would then get close to his 19th Grand Slam and also becoming the first man to win all Grand Slam titles, twice. Alexander Zverev vs Stephanos Tsitsipas, French Open 2021 Live Streaming Online: How to Watch Free Live Telecast of Men's Singles Semi-Finals Tennis Match in India?

Based on their last five matches, Nadal holds the advantage over his Serbian rival, winning three and would soon hope at securing a 21st Grand Slam. But on his day, Djokovic can prove to be an equally potent force to deal with. Here is a look at the last five matches between these two tennis superstars:

1) Italian Open final 2021: In a match that lasted close to three hours, Nadal emerged triumphant over his Serbian rival 7-5, 1-6, 6-3 to clinch his 10th Italian Open title. The match was an evenly contested one with the first set being closely fought. From being 0-2 down, Nadal recovered in time to make it 5-5 at one point in time. Djokovic then dominated with five straight wins in the second set. In the decider which was locked at 2-2, Nadal went on to win the next 12 points and eventually win the contest.

2) Rolland Garros final 2020: Djokovic won the Italian Open heading into this tournament and understandably, he was full of confidence. But they don't call Nadal the 'King of Clay' for no reason and he showed why. The Spaniard went on to defeat the Serbian top seed 6-0, 6-2, 7-5 in dominating fashion in a match lasting for two hours and 41 minutes. Everything worked just right for Nadal on the day as he barely missed anything, scoring 31 winners in the match. Djokovic, who was vying for his 18th Grand Slam title made 52 unforced errors, which reduced his chances of defeating Nadal in France.

3) ATP Cup Final 2020 (hard court): Coming on the back of winning 17 sets against Nadal on hard courts, Djokovic won four service points to finish the first set in just 39 minutes. The match was important, not just for Djokovic but also for his country, with Spain holding a 1-0 lead. The second set lasted for a long time and even though Nadal had won eight out of the 10 points from his serves and volleys, Djokovic ensured he remained composed in the tie-break to secure the win 6-2, 7-6(4).

4) Italian Open final 2019 (clay court): It was Nadal's 50th Masters 1000 final and he wouldn't let this chance to win the title go, even if it meant battling and defeating top seed Novak Djokovic. Nadal's win of 17 breakpoints in the match eventually proved to be the decider in this match. The Spaniard had a higher win rate of second serve points -61%, which is more than Djokovic's first serve points- 60%. This win also meant that the Spaniard won a title for the 16 successive years in his career.

5) Australian Open final, 2019: The match was a repeat of the 2012 Australian Open final and Djokovic started off with a bang, securing wins in the first three games. The Serbian had lost six service points and also made four unforced errors but Nadal wasn't able to exploit these and take an advantage in the match. The Spaniard won his first breakpoint in the third set but Djokovic was on another level altogether, winning his 15th Grand Slam and 73rd tour trophy of his illustrious career.

(The above story first appeared on LatestLY on Jun 11, 2021 04:54 PM IST. For more news and updates on politics, world, sports, entertainment and lifestyle, log on to our website latestly.com).