The Undertaker Announces Retirement: From Failing to Become WWE Grand Slam Champion to Choking Kurt Angle Almost to Death, Here Are 5 Lesser-Known Facts About The Deadman 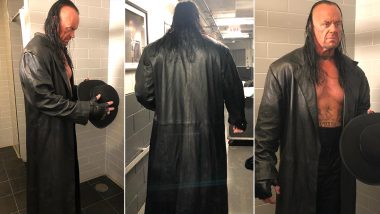 The Undertaker announces retirement from WWE in the fifth and last episode of his documentary series, 'The Last Ride' which is being telecast on WWE network. Immediately as the show went off the air, WWE sent out a tweet with the hashtag #ThankYouTaker, thereby confirming the news of The Deadman retirement. The 55 years old Mark Calaway, better known by the ring name of The Undertaker spent almost 30 years in WWE. On the occasion of The Undertaker's retirement, we will share five interesting lesser-known facts about The Deadman in this article. The Undertaker Announces Retirement: Relive The Deadman's Best Matches and Grand Entrances in WWE (Watch Videos)

The Undertaker started his wrestling career with World Championship Wrestling (WCW) in the year 1987 and made his debut in WWE in the year 1990. In his WWE career, The Deadman has been four-time WWF/WWE champion and has won World Heavyweight Champion thrice. The Undertaker is famous for his 21-0 WrestleMania winning streak. He wasn't able to make 22-0 at WrestleMania 30, as he lost to Brock Lesnar that year in the show of shows. His last match in WWE was at WrestleMania 36, when he locked horns with AJ Styles in a boneyard match.  The Deadman won that match with pride and it was notably the best match of this year's WrestleMania. Now let us take a look at The Undertaker's lesser-known facts. The Undertaker Announces Retirement From WWE, Says ‘There’s Nothing Left for Me to Conquer or Accomplish’

Lesser Known Facts About The Undertaker

1. The Undertaker might have accomplished major accolades in his wrestling career, however, he failed to become Grand Slam Champion. In order to be titled as Grand Slam Champion, a wrestler should have won WWF/WWE title, a Tag Team title and both United States and Intercontinental title. The Undertaker has won World titles and also been Tag Team champion, however, he has never been the United States and Intercontinental title.

3. The Undertaker has never pinned Mr Vince McMahon, as the chairman of WWE never lost to The Deadman in a one on one match. The two of them even fought in a buried alive match at Survivor Series 2003, where Kane interfered in the end to help Vince burry The Deadman.

4. Kurt Angle in his autobiography has mentioned that he was once almost choked to death by The Undertaker. The incident happened when Kurt Angle got into a playful fight with Vince McMahon on a WWE flight just for fun purpose. The Undertaker on seeing his boss in trouble, proceeded to choke Angle out. Kurt Angle revealed he barely had air in his lungs to tell Taker that it was just for fun.

5. The Undertaker made Vince McMahon apologise legendary wrestler Bret Hart, after the infamous night of the Montreal Screwjob.

The Undertaker after losing to Lesnar at WrestleMania 30, went on to lose second time at the show of shows against Roman Reigns at WrestleMania 33. The Undertaker stated on the episode of 'The Last Ride' that, 'I’m at a point that this time the cowboy really rides away.' The Deadman further went on to say that now he has accomplished whatever he wished for in his career, it's now time to take rest and spent the rest of his life with his family. The Undertaker will indeed be missed by his fans, no other wrestler could ever match his gimmicks like  'Lord of Darkness', 'American Bad Ass' to name a few.

(The above story first appeared on LatestLY on Jun 22, 2020 01:15 PM IST. For more news and updates on politics, world, sports, entertainment and lifestyle, log on to our website latestly.com).