WWE News: From Brock Lesnar Not Being Under Contract to Rey Mysterio Getting Ruled Out Due to Torn Triceps, Here Are 5 Interesting Updates to Watch Out For

The Viper won the number one contender tournament for WWE Championship, which means he will face Drew McIntyre at WWE Clash of Champions 2020. Meanwhile, McIntyre is out of action due to injury incurred last week on Raw by the hands of The Legend Killer. 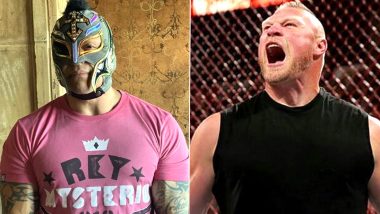 Just a day before we witness an exciting episode of Monday Night Raw where we saw Randy Orton yet again standing tall at the end of the show. The Viper won the number one contender tournament for WWE Championship, which means he will face Drew McIntyre at WWE Clash of Champions 2020. Meanwhile, McIntyre is out of action due to injury incurred last week on Raw by the hands of The Legend Killer. The number one contender tournament featured Seth Rollins, Keith Lee, Dominik Mysterio, Kevin Owens, Dolph Ziggler and Randy Orton. Lee, Rollins and Orton made it to the final triple threat match to determine the number one contender. The Viper pinned Rollins after giving RKO to The Limitless One to get the opportunity to become WWE Champion once again in his career. In this article, we will share with you top 5 WWE news, which includes Brock Lesnar not being under contract to Rey Mysterio getting ruled out due to torn triceps. WWE Raw Results Aug 31, 2020 Results and Highlights: Randy Orton Becomes Number One Contender to Face Drew McIntyre at Clash of Champions For World Title Match.

1. Brock Lesnar Not Under WWE Contract

Former WWE Champion who has been out of action since the conclusion of WrestleMania 36 is reportedly not under the contract of WWE. PW Insider has reported this news. Also, WWE has pulled out Lesnar's merchandise from promotion online store, which hints that the Beast Incarnate currently has no contract with WWE. WWE News: From Details About Roman Reigns Turning Heel to Jimmy Uso’s Return, Here Are 5 Interesting Updates You Need to Know.

CM Punk has yet again trolled WWE, this time for Payback 2020. Former WWE announcer Renee Young tweeted that she is missing Retribution at Payback 2020 who has been invading Raw and SmackDown over past few weeks. Punk takes a dig at WWE Payback 2020 by replying to Renee that watch ice hockey instead. Currently, the NHL postseason in under progress which is giving WWE a tough time in terms of viewership. Meanwhile, check out tweets below.

3. Rey Mysterio Ruled Out Due to Torn Triceps

As reported by WWE, Rey Mysterio suffered torn triceps injury at WWE Payback 2020 where he had teamed up with his son Dominik to face Seth Rollins and Buddy Murphy. The father-son duo won that match at Payback 2020, however, Mysterio incurred an injury which means he will be out for months and his son Dominik Mysterio will actively participate on the red brand of WWE.

4. Mandy Rose Will Not Contest For SmackDown Women's Championship

As reported by Tom Colohue of Sportskeeda, WWE will not give Mandy Rose the opportunity to step up against Bayley for SmackDown Women's Championship. WWE will choose Naomi to get the opportunity, considering her popularity. Although, Rose just got a big win over Sonya Deville at SummerSlam 2020, however, still the diva wrestler might have to wait for few more days for the title shot.

Dominik Mysterio while speaking to talkSPORT, revealed that after his debut match against Seth Rollins at SummerSlam 2020, WWE chairman Vince McMahon hugged him and applauded him for his effort. Dominik further said that he thanks Vince for giving him the opportunity to fight against a big star like Rollins with his dad to support him in the corner.

WWE fans will now look forward to Clash of Champions pay per view which is scheduled to take place on September 27, 2020. Stay tuned with LatestLY for more updates and news from WWE.

(The above story first appeared on LatestLY on Sep 02, 2020 09:01 AM IST. For more news and updates on politics, world, sports, entertainment and lifestyle, log on to our website latestly.com).