WWE fans were welcomed this week with an exciting episode of Raw where we saw the debut of Keith Lee and even Dominik Mysterio fought his first match on the red brand of WWE. The biggest blow of the night was Drew McIntyre being taken out of the Amway Center in an ambulance. As the WWE Champion was viciously hit by a three punt kicks from Randy Orton. 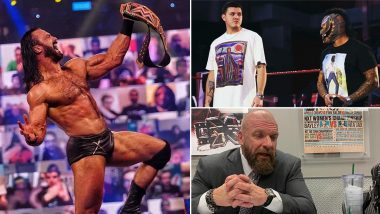 WWE fans were welcomed this week with an exciting episode of Raw where we saw the debut of Keith Lee and even Dominik Mysterio fought his first match on the red brand of WWE. The biggest blow of the night was Drew McIntyre being taken out of the Amway Center in an ambulance. As the WWE Champion was viciously hit by a three punt kicks from Randy Orton. Keith Lee, on seeing his friend assault confronted The Viper for a match at Payback 2020. Meanwhile, you have arrived at the right platform, if you are looking for WWE news which includes details about Drew McIntyre's injury to Triple H's message for Dominik after his match at SummerSlam 2020. WWE News: From Randy Orton Trolling Roman Reigns to Braun Strowman Thanking Fans on Completion of His Five Years in The Company, Here Are Five Updates You Need to Know.

WWE champion Drew McIntyre suffered a serious injury on this past week episode of Raw due to the assault by Randy Orton. This could keep McIntyre out of action for weeks. WWE medical staff are, however, confident that the Scottish Psychopath will make it back to ring after a few weeks time. Initially, the medical staff feared that McIntyre suffered a skull injury which could have been career-threatening. However, this injury would only keep him out of action from Payback 2020. WWE Raw Aug 24, 2020 Results and Highlights: Randy Orton Punts Drew McIntyre, Keith Lee Debuts on Red Brand to Challenge ‘The Viper’ For Match at Payback.

CM Punk has always been known for his pipe bomb throughout his career, yet again took a dig at WWE. As Renee Young announced her farewell on SummerSlam 2020, CM Punk went on Twitter to troll WWE. Punk took the reference of the character from 'The Shawshank Redemption' who swam through miles of sewage to escape. Punk here categorises WWE as the sewage here and Renee Young as the character.

Triple H appreciated Rey Mysterio's son Dominik for his hard-fought battle against Seth Rollins at SummerSlam 2020. Dominik Mysterio must have lost the match, however, he did win the hearts of many people through his performance at the pay per view event. Check out Triple H's tweet below for Dominik. WWE SummerSlam 2020 Results and Highlights: Bray Wyatt Defeats Braun Strowman to Become Universal Champion; Roman Reigns Hits ‘The Fiend’ With Spear on His Return.

.@35_Dominik...amazing performance in your DEBUT match at #SummerSlam. #RESPECT https://t.co/jWYydKAVtz

Eric Bischoff while speaking to Sportskeeda, revealed that he is impressed with the idea of WWE bringing back Roman Reigns as a heel character. However, former SmackDown executive director felt that WWE has taken too long to implement this idea. They should have turned The Big Dog as heel two years back.

Retribution has been constantly invading Raw and SmackDown since past few weeks. This week we saw them take out Rey Mysterio and Dominik Mysterio during their match against Seth Rollins and Buddy Murphy. People on Twitter predict Roman Reigns as leader of Retribution as this past week episode of Raw a clear picture of the faction standing in line was captured the person standing in the centre resembled The Big Dog, while the shortest people in the group could be Mickie James and Kalisto.

Spot the Huge Guy in Centre Who Resemble Roman Reigns

RETRIBUTION is here on #WWERAW!

Am I tripping or.... 🤡🤡#WWE #Retribution pic.twitter.com/O4IVpzJa81

It must also be noted that Roman Reigns has returned as heel character at SummerSlam 2020, where his t-shirt reads 'Wreck Everyone & Leave'. Now that's what Retribution does every week on Raw. Stay tuned with LatestLY for more updates and news from WWE.

(The above story first appeared on LatestLY on Aug 27, 2020 09:01 AM IST. For more news and updates on politics, world, sports, entertainment and lifestyle, log on to our website latestly.com).