WWE Raw Aug 17, 2020 episode took place at Performance Center in Orlando, Florida. This was the last episode of Monday Night Raw before we head to SummerSlam 2020. This week we saw Randy Orton making Shwan Michael his next victim as he delivered HBK with a punt kick. 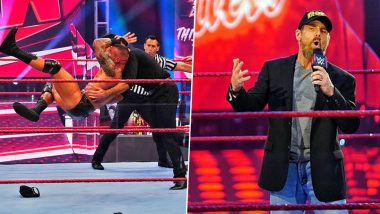 WWE Raw Aug 17, 2020 episode took place at Performance Center in Orlando, Florida. This was the last episode of Monday Night Raw before we head to SummerSlam 2020. This week we saw Randy Orton making Shawn Michaels his next victim as he delivered HBK with a punt kick. Soon we saw Drew McIntyre come out in the ring to teach The Viper some lesson. Orton moved out of the ring and when Scottish Psychopath started checking the condition of Shawn Michaels, The Legend Killer silently came from behind and hit WWE Champion with RKO. Scroll down to know about results and highlights of this week's Monday Night Raw. WWE Raw Aug 10, 2020 Results and Highlights: Randy Orton Hits Ric Flair With Punt Kick, Seth Rollins Assaults Dominik Mysterio After The Contract Signing For Their Match at SummerSlam 2020 (View Pics)

In the other segment of Raw, we saw Rey Mysterio return on Raw where he revealed that he will be at the corner of his son Dominik Mysterio at SummerSlam 2020. The Monday Night Messiah and Buddy Murphy came out in the ring to teach father and son some lesson, instead, they got the taste of their own medicines. Rollins was brutally smashed with a kendo stick strike by Rey Mysterio and his son.

Asuka and Shayna Baszler defeated Bayley and Sasha Banks in the Tag Team match on Raw. We also saw the interference of Nia Jax during that match, which Queen of Spades tackled well. Mickie James made her return to Monday Night Raw, unfortunately, she lost to Natalya by count-out, thanks to some help by Lana near ringside. We also witnessed Peyton Royce defeats Ruby Riot.

Retribution yet again invaded Raw, this time they did some damage to WWE TV production truck. Now let's speak about Raw Underground, where The Viking Raiders ambushed Dolph Ziggler. Here we also saw Riddick Moss & Arturo Ruas teamed up for a brawl. This week on Raw Angelo Dawkins revealed the footage which showed Zelina Vega tampering with Montez Ford’s trademark red cup. Although, Vega denied the fact that she is behind Ford's poisoning. We later saw Montez Ford defeat Andrade in one on one match. Shelton Benjamin defeats Cedric Alexander to become 24/7 champion.

@randyorton hits @dmcintyrewwe from OUT OF NOWHERE!! #RKO #WWERaw #SummerSlam

The Viper Takes Out WWE Champion

Shawn Michaels Was Here to Speak About Ric Flair

Rey Mysterio And Dominik in Action

Fans are now on the edge of their seat, as they are very curious to know what will happen when Dominik Mysterio will face Seth Rollins in a street fight at SummerSlam this Sunday on August 23, 2020. Also, Asuka will face Bayley and Sasha Banks both for SmackDown and Raw Women's champion respectively in different matches at SummerSlam 2020.

(The above story first appeared on LatestLY on Aug 18, 2020 11:53 AM IST. For more news and updates on politics, world, sports, entertainment and lifestyle, log on to our website latestly.com).