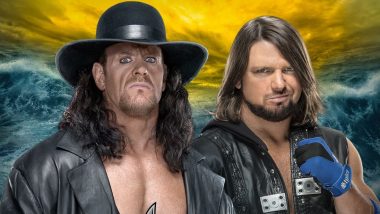 We have some interesting matches lined up for WrestleMania 36. The list includes Brock Lesnar vs Drew McIntyre for WWE Championship. The Scottish Psychopath earned this opportunity by winning men's Royal Rumble match in January, 2020. The show will also feature Edge vs Randy Orton last man standing match. The Rated R made a return to WWE by featuring in Royal Rumble match in January, 2020. This time WrestleMania 36 will also have The Undertaker in action against AJ Styles in a boneyard match. Unfortunately, Roman Reigns name has been pulled out of from his match against Goldberg for Universal Championship due to coronavirus fear. The Big Dog has just recovered from leukemia and considering that, as a precautionary measure Braun Strowman has taken his place. Fans will also look forward to John Cena vs 'The Fiend' Bray Wyatt match in Firefly Fun House. WWE SmackDown April 3, 2020 Results and Highlights: ‘The Fiend’ Bray Wyatt Plays Mind Games With His WrestleMania 36 Opponent John Cena (View Pics)

1. Brock Lesnar (c) vs. Drew McIntyre for the WWE Championship

2. Goldberg (c) vs. Braun Strowman for the WWE Universal Championship

5. Edge vs. Randy Orton in a Last Man Standing match

6. John Cena vs. ‘The Fiend’ Bray Wyatt in a Firefly Fun House match

7. Bayley (c) vs. Lacey Evans vs. Naomi vs. Sasha Banks vs. Tamina in an elimination match for the WWE SmackDown Women's Championship

8. The Undertaker vs. AJ Styles in a Boneyard match

10. The Miz and John Morrison (c) vs. The New Day (Big E and Kofi Kingston) vs. The Usos (Jey Uso and Jimmy Uso) in a ladder match for the WWE SmackDown Tag Team Championship

14. Sami Zayn (c) (with Cesaro and Shinsuke Nakamura) vs. Daniel Bryan (with Drew Gulak) for the WWE Intercontinental Championship

From women's division, it will be interesting to see how Becky Lynch defends her title against an aggressive opponent like Shayna Baszler. WWE Universe will also look forward to Rhea Ripley's title defence against Charlotte Flair, this will be the first time an NXT title would be defended at WrestleMania event. WrestleMania 36 is indeed too big for just one night. The second-day action will continue on the next day. Stay tuned with LatestLY for results and updates from WrestleMania 36.

(The above story first appeared on LatestLY on Apr 04, 2020 11:00 PM IST. For more news and updates on politics, world, sports, entertainment and lifestyle, log on to our website latestly.com).