Given the high propagation and reach of the 900 Mhz spectrum, it would result in wider availability of 4G network across Delhi-NCR -- one of the largest and most dense telecom markets in the country, the company added. 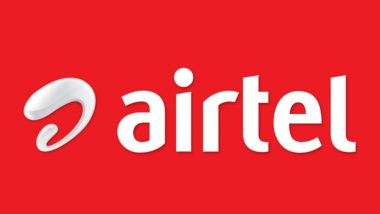 New Delhi, June 10: Facing stiff competition from fast-expanding Reliance Jio, telecom major Bharti Airtel on Monday announced it has upgraded its mobile network in Delhi-NCR with the deployment of LTE 900 technology on the 900 Mhz spectrum as it also aims to enhance indoor network experience for its 4G smartphone customers. Airtel Introduces ‘Bandwidth on Demand’ Service Globally for Business Usage.

"As we introduce LTE-900, we will further step up our indoor network coverage. It will enable high speed connectivity and HD quality VoLTE calling for our customers in Delhi," Vani Venkatesh, CEO, Delhi-NCR, Bharti Airtel, said in a statement.

Given the high propagation and reach of the 900 Mhz spectrum, it would result in wider availability of 4G network across Delhi-NCR -- one of the largest and most dense telecom markets in the country, the company added.

As part of its network transformation programme, the telecom major has been deploying network technologies such as pre-5G Massive MIMO and Carrier Aggregation to enhance network capacity over existing spectrum.

The firm uses a mix of 2,300 Mhz, 1,800 Mhz, 2,100 Mhz and 900 Mhz spectrum bands to deliver network experience to its users. No other operator in the world has scored better at a country level than Reliance Jio in India in terms of 4G availability, a report from London-based mobile analytics company Opensignal said in April.

Jio's score grew by close to one percentage point to reach 97.5 per cent, up from 96.7 per cent about six months ago, said the "Mobile Network Experience" report. Airtel Join Hands With Ericsson For Offering HD Quality Calling Over 4G Smartphones, Smart Watches.

Notably, with 22.2 Mbps (megabits per second) average download speed, Reliance Jio topped the 4G download speed chart of the Telecom Regulatory Authority of India (TRAI) for March. For Jio, its an improvement over 20.9 Mbps achieved in February.

(The above story first appeared on LatestLY on Jun 10, 2019 08:32 PM IST. For more news and updates on politics, world, sports, entertainment and lifestyle, log on to our website latestly.com).