Apple iPhone 12 May Arrive in October 2020, Apple Watch Series 6 and iPad in September 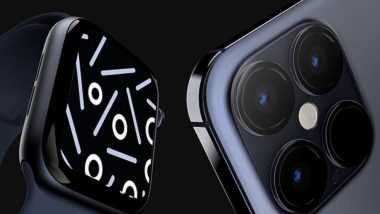 San Francisco, Aug 14: Apple is reportedly planning to hold its iPhone 12 event in the second week of October, with pre-orders to take place later that week and shipments to start the week after that.

In a recent tweet, Jon Prosser, a reliable Apple insider said that the iPhone maker may hold an event on Tuesday (October 13) and would accept pre-orders for new iPhone 12 models from October 16, and will deliver the new devices starting on October 23. Apple iPhone 12 Series & Apple Watch Series 6 to Be Launched on September 8: Report.

In addition, Prosser also said that Apple will release the Watch Series 6 and an unspecified new iPad during the week of September 7.

Earlier, Prosser said there is also the possibility that a later iPhone 12 launch event could allow more people to attend in-person.

The late announcement will give the Cupertino-based tech giant time to reopen more stores in different markets that are closed due to pandemic.

Apple is expected to launch four new iPhones under the iPhone 12 series which would include two premium variants.

iPhone 12 Pro will come in 6.1-inch or 6.7-inch sizes and may feature a high refresh-rate 120Hz ProMotion display, as presently seen on iPad Pro.

(The above story first appeared on LatestLY on Aug 14, 2020 12:02 PM IST. For more news and updates on politics, world, sports, entertainment and lifestyle, log on to our website latestly.com).