Google Acquires 1.28% Stake in Bharti Airtel, Invests Up to $1 Billion

Bharti Airtel and Google on Friday announced a multi-year agreement to boost India's digital ecosystem, with Sundar Pichai-led tech giant investing $700 million to acquire 1.28 per cent ownership in Airtel and up to $300 million toward commercial agreements. 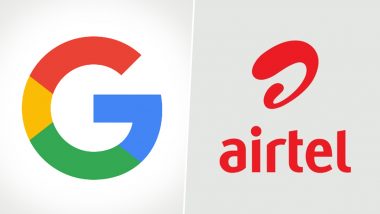 The $700 million equity investment in Bharti Airtel is at a price per share of Rs 734, while $300 million will go towards investments in scaling Airtel's offerings that covers a range of devices to consumers.

This deal will be subject to necessary regulatory approvals.

As a part of their first commercial agreement, Airtel and Google will work together to build on Airtel's extensive offerings that covers a range of Android-enabled devices to consumers via innovative affordability programmes.

"Our commercial and equity investment in Airtel is a continuation of our Google for India Digitisation Fund's efforts to increase access to smartphones, enhance connectivity to support new business models, and help companies on their digital transformation journey," said Pichai, CEO of Google and Alphabet.

The companies said they will continue to explore further opportunities to bring down the barriers of owning a smartphone across a range of price points, in partnership with various device manufacturers.

Both companies will also potentially co-create India-specific network domain use cases for 5G and other standards, with cutting-edge implementations.

Airtel is already using Google's 5G-ready Evolved Packet Core and Software Defined Network platforms, and plans to explore scaling up the deployment of Google's network virtualisation solutions to deliver a superior network experience to their customers.

(The above story first appeared on LatestLY on Jan 28, 2022 11:00 AM IST. For more news and updates on politics, world, sports, entertainment and lifestyle, log on to our website latestly.com).