Multiple users on Reddit have complained about the flickering issue on the Pixel 6 Pro device when the power button is pressed. Another issue that users have reported is the green tint on both Pixel 6 and 6 Pro devices. 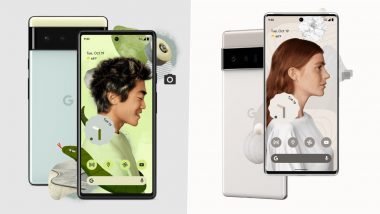 Google Pixel 6 Series was launched globally last week. The Pixel 6 Series comprise Pixel 6 and Pixel 6 Pro smartphones. Both handsets went on sale on Thursday and a day after its sale, users are reportedly facing several issues. Multiple users on Reddit have complained about the flickering issue on the Pixel 6 Pro device when the power button is pressed. It is unclear if this problem is also experienced on the Pixel 6 phone as most complaints are about the top-end model. Google Pixel 6, Pixel 6 Pro With 50MP Camera & Android 12 Launched From $599; Check Prices, Features & Availability Here.

One of the users who experienced this problem has also made a brief video to replicate the problem. It is said that the flickering issue might be due to a static charge that the smartphone would release upon pressing the power button. Another issue that users have reported is the green tint on both Pixel 6 and 6 Pro devices, which was also reported on the Pixel 4, Pixel 5a Series and iPhone 12 Series. The green tint problem is common for OLED panels, especially for those phones that support a high refresh rate.

Moreover, there is one more defect a user reported on Twitter. The user noticed two punch-hole designs on the Pixel 6 Pro phone due to some bug and uploaded the video on the social media platform. It is said that there could be some dead pixels on the display due to which the secondary punch-hole cutout is seen. Google is yet to acknowledge these issues and announce the fix for the same.

(The above story first appeared on LatestLY on Oct 29, 2021 05:43 PM IST. For more news and updates on politics, world, sports, entertainment and lifestyle, log on to our website latestly.com).