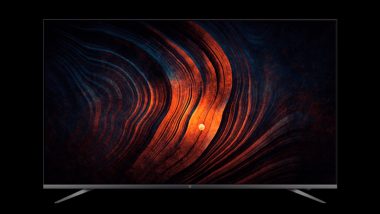 OnePlus, the Chinese smartphone maker will officially its OnePlus TV U1S Series smart TVs in India soon. The company teased its summer event today on its official Twitter account and Amazon India website with a 'Notify Me' button. Earlier today, the Amazon listing reportedly confirmed the OnePlus Nord CE 5G launch in India. The report also claimed that the company will also launch its OnePlus TV U1S Series during the event. Now another tipster has claimed that the OnePlus TV U1S Series could be introduced in the next 4-6 weeks. OnePlus India Teases Summer Launch Event, OnePlus Nord 2 & Nord CE 5G Debut Expected.

In addition to this, the tipster also revealed the prices, features and specifications of smart TVs. AS per the tipster, the OnePlus TV U1S Series will come powered by a MediaTek processor coupled with 2GB RAM and 16GB of internal storage. OnePlus TV U1 S Series will come in three screen sizes - a 50-inch, a 55-inch and a 65-inch and all models will sport a DLED display screen.

OnePlus TV U1S will be offered with a low blue light mode and a new live TV section in OxygenPlay. The 65-inch model could get a webcam that will come with a fixed focus sensor, physical shutter, a USB Type-C port and a built-in microphone. All models of the OnePlus TV U1S Series will sport Dolby Atmos supported 30W speakers tuned by Dynaudio. OnePlus' upcoming smart TVs will run on Android TV 10 OS and will support 1080p Google Duo video calls. Coming to the pricing, 50-inch, 55-inch and 65-inch TVs are likely to be priced at Rs 36,999, Rs 42,999 and Rs 59,999 respectively.

(The above story first appeared on LatestLY on May 27, 2021 04:58 PM IST. For more news and updates on politics, world, sports, entertainment and lifestyle, log on to our website latestly.com).