Oppo Reno8 Reportedly Spotted on Geekbench, To Be Launched Soon 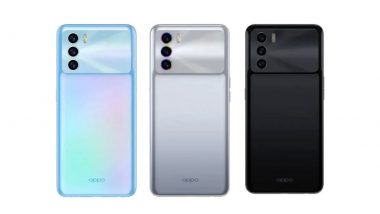 Oppo, the Chinese phone maker, is said to launch the Reno 8 Series in China soon. The Reno 8 Series will comprise Reno8, Reno8 Pro and Reno8 Lite. Ahead of its launch, the Reno8 smartphone has been spotted on the Geekbench website. The listing was first spotted by MySmartPrice. Oppo Reno8 To Reportedly Debut in India by the End of June 2022.

According to the Geekbench listing, an Oppo smartphone has been spotted with a model number PGAM10. It managed to score 712 points in the single-core test and 2385 points in the multi-core test. The listing also reveals several key specifications of the handset. According to the listing, Oppo Reno8 will be powered by a Snapdragon 7 Gen 1 SoC. It is said to feature a 6.55-inch OLED display with a refresh rate of 120Hz.

Oppo Reno8 is likely to get a 4,500mAh battery with 80W fast charging support and could boot on Android 12 based on ColorOS 12.1. For photography, the device will come with a 50MP primary lens, an 8MP ultra-wide-angle lens and a 2MP shooter. Upfront, there will be a 32MP snapper for selfies and video calls.

(The above story first appeared on LatestLY on May 06, 2022 02:27 PM IST. For more news and updates on politics, world, sports, entertainment and lifestyle, log on to our website latestly.com).