RedmiBook Laptop To Be Launched in India on August 3, 2021

Xiaomi's sub-brand Redmi will officially launch its RedmiBook laptop in the Indian market on August 3, 2021. The upcoming laptop might come powered by AMD Ryzen processors. 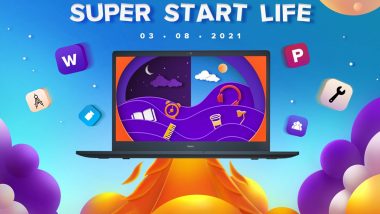 Xiaomi's sub-brand Redmi will officially launch its RedmiBook laptop in the Indian market on August 3, 2021. The company has shared the official poster of the same on its official Twitter account revealing its launch date. Xiaomi has also set up a dedicated page for its upcoming RedmiBook on the official website. Xiaomi entered the laptop segment in the country last year with the launch of the Mi Notebook range. In China, RedmiBook, RedmiBook Air and RedmiBook Pro models have already been launched and now the laptop is all set to arrive in India. RedmiBook Air 13 with 10th Gen Intel Core i5 Processor Launched; Check Prices, Features, Variants & Specifications.

As per the teaser, RedmiBook will get thick bezels around the display and a vintage design. On the chin, a Redmi branding can also be seen. As China has many RedmiBook models, it is unsure which model will make its debut in the Indian market. Also, the teaser page does not reveal any key features of the upcoming laptop.

So, folks in the laptop team have been up to some shenanigans🤓

They have been working on a top-secret project and a couple of scenes have leaked!🧐

We think you'll love to see what these guys have been up to!😁

As per a new report, with the launch of RedmiBook, Xiaomi aims to target students as well as those looking for affordable notebooks. As such, the upcoming laptop might come powered by AMD Ryzen processors. Also, the RedmiBook models in China are powered by the same processor. Apart from this, nothing more is known. Hopefully, Redmi releases new teasers of its upcoming laptop before its launch.

(The above story first appeared on LatestLY on Jul 27, 2021 04:06 PM IST. For more news and updates on politics, world, sports, entertainment and lifestyle, log on to our website latestly.com).