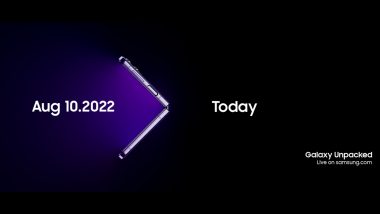 Samsung, the South Korean tech giant, will host its Galaxy Unpacked 2022 event today globally. During the event, the company is expected to launch the highly anticipated Galaxy Z Fold 4, Galaxy Z Flip 4 smartphones, along with Galaxy Buds 2 Pro and Galaxy Watch 5 Series. The smartphones are said to be the successors of the Galaxy Z Flip 3 and Galaxy Z Fold 3. The launch event will commence at 6:30 pm IST and will be streamed live via Samsung's official YouTube and other social media channels. Users can also watch the live telecast of the event here by clicking on the below-embedded video. Samsung Galaxy Unpacked 2022 Event Set for August 10; Galaxy Z Flip 4, Galaxy Z Fold 4 Launch Expected.

Samsung Galaxy Z Flip 4 is said to come with a 6.7-inch Super AMOLED screen and a 120Hz refresh rate. It might be powered by Qualcomm Snapdragon 8+ Gen 1 SoC coupled with 8GB of RAM and 512GB of internal storage. For optics, the handset could flaunt a 12MP dual rear camera setup and more.

(The above story first appeared on LatestLY on Aug 10, 2022 09:07 AM IST. For more news and updates on politics, world, sports, entertainment and lifestyle, log on to our website latestly.com).