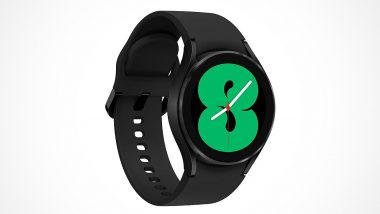 The new report specifies the W920 SoC will offer "1.25x faster processing times compared to the Exynos 9110" and "8.8x smoother graphics performance". The new chipset will be paired with 1.5GB RAM which is yet another upgrade over past Galaxy Watches, GSMArena reported. With the added power, Galaxy Watch4 series will make One UI Watch based on Google's Wear OS feel and perform buttery smooth, it added.

Another report claimed that Samsung's new watches will offer double the storage too. Since the Galaxy Watch3 series had 8GB of internal storage, the Watch4 should come with 16GB and the reason behind the change is the shift to Google's Wear OS.

This opens up the Google Play Store for wearable apps so users will likely have to store more apps in addition to their saved audio tracks, for example, the report said. During Samsung's announcement of the new One UI software based on Wear OS, the spokesperson outlined a feature where all your smartphone apps would appear on your Galaxy Watch4 as well, as long as they have Wear OS versions.

(The above story first appeared on LatestLY on Jul 19, 2021 09:18 AM IST. For more news and updates on politics, world, sports, entertainment and lifestyle, log on to our website latestly.com).