South Korean major Samsung on Wednesday unveiled the fourth generation of foldable smartphones -- Galaxy Z Flip4 (for $1,000) and Galaxy Z Fold4 (for $1,780) -- with hyper-fast 5G that will be available in India for pre-orders from next week. 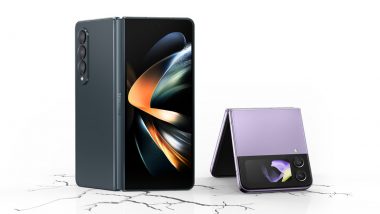 Bengaluru: South Korean major Samsung on Wednesday unveiled the fourth generation of foldable smartphones -- Galaxy Z Flip4 (for $1,000) and Galaxy Z Fold4 (for $1,780) -- with hyper-fast 5G that will be available in India for pre-orders from next week. Globally, the foldable devices will be available for pre-order beginning August 10, with general availability starting August 26 (in select countries). Samsung Galaxy Z Flip 4 With Snapdragon 8+ Gen 1 Processor Launched, Check Price & Other Details Here.

In India, the new foldable phones will be available for open sale from early next month. The pricing for new devices in the country will also be revealed at a later date. The company also introduced Galaxy Watch5 and Watch5 Pro smartwatches (in 40mm and 44 mm sizes), along with a Galaxy Buds2 Pro hearable device, at its 'Galaxy Unpacked' global event.

The Galaxy watches will be available for pre-order in select markets starting from August 10 with sale starting August 26, according to the company.

"Created in collaboration with our world-class partners, the next foldable devices offer unparalleled mobile experiences that meet the needs of our most dynamic users," said Dr TM Roh, President and Head of Mobile eXperience Business at Samsung.

Roh said last month that the world saw nearly 10 million foldable smartphones being shipped worldwide in 2021 -- an industry increase of more than 300 per cent from 2020.

In India, Samsung's foldable phones have grown four times since 2020 in the country, with Fold device garnering 61 per cent market share while its Flip foldable model reaching 39 per cent market share in the country (according to CMR). Touted as the toughest foldables ever, the Flip4 and Fold4 come with armor Aluminum frames and hinge cover, along with exclusive Corning Gorilla Glass Victus+ on the cover screen and rear glass.

Galaxy Z Flip4 comes in Bora Purple, Graphite, Pink Gold and Blue finishes while Galaxy Z Fold4 in Graygreen, Beige and Phantom Black, along with Burgundy colours. The Flip4 device comes with an upgraded camera and is powered by the Snapdragon 8+ Gen 1 Mobile Platform. It houses an expanded 3,700mAh battery with super-fast charging that claims to take the battery power up to 50 per cent in around 30 minutes.

Galaxy Z Fold4, also with Snapdragon 8+ Gen 1 Mobile Platform and hyper-fast 5G, is the first device to ship with Android 12L, a special version created by Google for large-screens, including foldables. Galaxy Z Fold4 offers an upgraded 50MP wide lens and 30x Space Zoom lens, along with a variety of camera modes.

"Content is even more immersive and distinctive on the 7.6-inch main screen, a 120Hz adaptive refresh rate, and a less visible Under Display Camera (UDC) featuring a new scatter-type sub-pixel arrangement," said Samsung.

Galaxy Watch5 is equipped with a unique 'BioActive Sensor' that reveals heart rate, blood oxygen level and even stress level. Watch5 Pro has the largest battery in a Galaxy Watch. It's 60 per cent larger than Galaxy Watch4. In addition, users can monitor blood pressure and ECG from their wrist but these heath functions are only available in select markets.

(The above story first appeared on LatestLY on Aug 10, 2022 07:30 PM IST. For more news and updates on politics, world, sports, entertainment and lifestyle, log on to our website latestly.com).