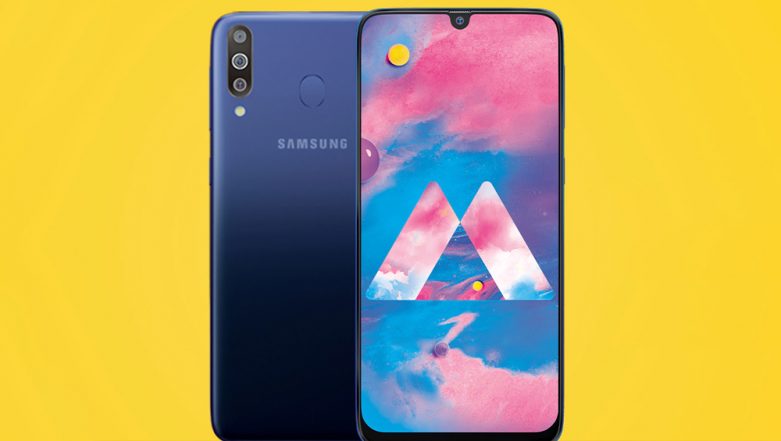 Samsung, the Korean tech major on Wednesday officially announced the prices for its third smartphone in the Galaxy M Series - Galaxy M30 in India. Launched at Rs 14,999 for the base variant (4GB + 64GB), the new Samsung Galaxy M30 will be made available for online sale on both Amazon as well as Flipkart. Pitted against Xiaomi's upcoming Redmi Note 7, the new Galaxy M30 is offered in x variants - 4GB + 64GB & 6GB + 128GB. As a reminder, Samsung has already launched Galaxy M10, Galaxy M20 smartphones last month with a price point of Rs 7990 and Rs 12,990 respectively. New Samsung Galaxy A50 India Price Leaked Ahead of Tomorrow’s Launch; Galaxy A10 Render Images Surface Online.

Talking about the display, the new Galaxy M30 gets a 6.4-inch Super AMOLED FHD+ Infinity U screen with 1080 x 2220 pixels of resolution. The company has also added a fingerprint sensor at the back for added security and unlocking. Additional highlight of the new Galaxy M30 is that the device gets a triple camera setup. Samsung Galaxy Fold Vs Huawei Mate X; Specifications, Features, Price & Sale Date.

For photography, there is a triple camera at the back which comprises of a 13MP sensor with an f/1.9 aperture while the 5MP lens is a secondary sensor with super-wide angle lens along with an f/2.2 aperture. The third camera on the device is a 5MP depth lens with f/2.2 aperture. For selfies and video calling, the company has incorporated a 16MP camera with f/2.0 aperture support face unlocking. Samsung To Launch New Galaxy S10 Smartphones in India on March 6.

Under the skin, the Samsung's new Galaxy M30 comes powered by in-house developed octa-core Exynos 7904 SoC that is clubbed with up to 6GB of RAM and up to 128GB of onboard storage options. The handset is fuelled by a huge 5,000 mAh battery with 15W fast charging support. Running the latest Android 9.0 Pie OS on the top of Samsung's new Experience UI. The smartphone comes in two exciting colours - Gradient Black and Gradient Blue. Samsung Galaxy A30, Galaxy A50 Smartphones With Super AMOLED Displays Revealed.