Peering back 10 billion years into the universe's past, astronomers have found a pair of quasars that are so close to each other they look like a single object in ground-based telescopic photos, but not in Hubble Space Telescope's crisp view. 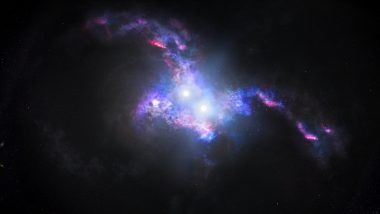 Washington, April 8: Peering back 10 billion years into the universe's past, astronomers have found a pair of quasars that are so close to each other they look like a single object in ground-based telescopic photos, but not in Hubble Space Telescope's crisp view.

The researchers believe the quasars are very close to each other because they reside in the cores of two merging galaxies. The team went on to discover yet another quasar pair in another colliding galaxy duo.

A quasar is a brilliant beacon of intense light from the centre of a distant galaxy that can outshine the entire galaxy.

It is powered by a supermassive black hole voraciously feeding on inflating matter, unleashing a torrent of radiation.

"We estimate that in the distant universe, for every 1,000 quasars, there is one double quasar. So finding these double quasars is like finding a needle in a haystack," said lead researcher Yue Shen of the University of Illinois at Urbana-Champaign in the US.

The discovery of these four quasars offers a new way to probe collisions among galaxies and the merging of supermassive black holes in the early universe, researchers said.

Quasars are scattered all across the sky and were most abundant 10 billion years ago. There were a lot of galaxy mergers back then feeding the black holes. Therefore, astronomers theorise there should have been many dual quasars during that time.

"This truly is the first sample of dual quasars at the peak epoch of galaxy formation with which we can use to probe ideas about how supermassive black holes come together to eventually form a binary," said research team member Nadia Zakamska of the Johns Hopkins University in Baltimore, Maryland.

The team's results appeared in the online issue of the journal Nature Astronomy.

Shen and Zakamska are members of a team that is using NASA's Hubble Space Telescope, the European Space Agency's Gaia space observatory, and the Sloan Digital Sky Survey, as well as several ground-based telescopes, to compile a robust census of quasar pairs in the early universe.

The observations are important because a quasar's role in galactic encounters plays a critical part in galaxy formation, the researchers said.

(The above story first appeared on LatestLY on Apr 08, 2021 01:11 PM IST. For more news and updates on politics, world, sports, entertainment and lifestyle, log on to our website latestly.com).