UN Secretary-General Antonio Guterres warned that land degradation from climate change and the expansion of agriculture, cities and infrastructure "undermines the well-being of 3.2 billion people". 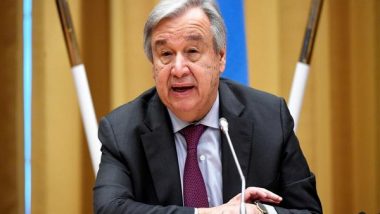 "Humanity is waging a relentless, self-destructive war on nature. Biodiversity is declining, greenhouse gas concentrations are rising, and our pollution can be found from the remotest islands to the highest peaks," he said in a message on Wednesday to mark the World Day to Combat Desertification and Drought.

"We must make peace with nature," he noted.  COVID-19 Cannot Be Beaten One Country At A Time, Says UN Secretary General Antonio Guterres

The top UN official said that while "land can be our greatest ally", currently it's "suffering".

Land degradation is harming biodiversity and enabling infectious diseases, such as COVID-19, to emerge, he explained.

"Restoring degraded land would remove carbon from the atmosphere help vulnerable communities adapt to climate change and it could generate an extra $1.4 trillion in agricultural production each year."

Land restoration is "simple, inexpensive and accessible to all", he added, calling it "one of the most democratic and pro-poor ways of accelerating progress towards the Sustainable Development Goals".

To meet an ever-growing demand for food, raw materials, roads and homes, humans have altered nearly three quarters of the earth's surface, beyond land that is permanently frozen.

Avoiding, slowing and reversing the loss of productive land and natural ecosystems now, is both urgent and important for a swift recovery from the pandemic and for guaranteeing the long-term survival of people and the planet.

"This year marks the start of the UN Decade on Ecosystem Restoration," Guterres said, calling on everyone to "make healthy land central to all our planning".

The World Day to Combat Desertification and Drought is marked each year on June 17.

Its purpose is to raise awareness of the presence of desertification and drought.

(The above story first appeared on LatestLY on Jun 17, 2021 12:00 PM IST. For more news and updates on politics, world, sports, entertainment and lifestyle, log on to our website latestly.com).