Billionaire Sir Richard Branson is set to fly to space aboard his Virgin Galactic's VSS Unity spaceplane on Sunday, July 11. 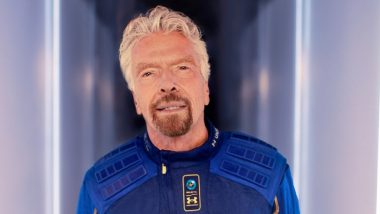 San Francisco, July 10: Billionaire Sir Richard Branson is set to fly to space aboard his Virgin Galactic's VSS Unity spaceplane on Sunday, July 11. Named "Unity 22", the mission will be the twenty-second flight test for VSS Unity and the Virgin Galactic's fourth crewed spaceflight. Sir Richard Branson is among four mission specialists who will fly to space. The pilots for this mission are Dave Mackay and Michael Masucci. Scroll down to know launch schedule, when and how to watch live streaming and other mission details. Richard Branson Set to Become the First Billionaire to Travel to Space on July 11, Beating Jeff Bezos and Elon Musk.

Virgin Galactic Unity 22 Spaceflight Launch Date and Time: The VSS Unity spaceplane will take off beneath the wings of its carrier aircraft, a plane known as VMS Eve, at 6:30 pm on July 11 (India time). CJ Sturckow and Kelly Latimer are the two pilots for VMS Eve aircraft. Richard Branson, Jeff Bezos and Elon Musk: Know How and When The Rich Billionaires are Riding Their Own Rockets into Space.

Where and How to Watch Virgin Galactic Unity 22 Spaceflight Live Streaming:

(The above story first appeared on LatestLY on Jul 10, 2021 11:40 AM IST. For more news and updates on politics, world, sports, entertainment and lifestyle, log on to our website latestly.com).