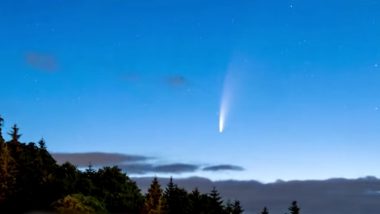 Rare comet C/2020 F3 NEOWISE was clearly visible to the naked eye on July 14. It appeared as a beautiful bright star with a tail light in the sky. And now a mesmerising time-lapse of the comet in the night sky captured by Nayoro Observatory in Japan has gone viral on social media platforms. The stunning beauty with a tail light can be seen moving amidst the clouds as the night progresses. It was captured from Nayoro city, Hokkaido island in Japan. Looking at it indeed feels like it is one of the lifetime experience and one should not miss it. Comet NEOWISE to Be Visible in India From Today For 20 Days: How and Where to Watch The Rare C/2020 F3.

The comet can also be spotted in the Indian skies, where it will be visible for approximately 20 minutes after sunset for 20 days, starting July 14. The comet was discovered by NASA's Near-Earth Object Wide-field Infrared Survey Explorer telescope, will be clearly visible to the naked eye on July 14. NASA astronaut Bob Behnken had posted a picture of the comet shining brightly near the curve of Earth.

Around July 30th, NEOWISE will be visible near Ursa Major (Saptarshi Mandal) at an altitude of 40 degrees be visible for an hour. NASA explained that the comet can best be viewed in the evening from mid-July onwards. It is advisable to look for the beautiful celestial occurrence away from city lights for a clearer view.

NEOWISE came through space to Earth from nearly 200 million kilometres away. On July 22, it will be closest to our planet at a distance of 103 million kilometres. According to NASA, the comet is about 5 km wide and its nucleus is covered with sooty dark particles leftover from its formation near the birth of our solar system around 4.6 billion years ago. NEOWISE will be visible from Earth next time only in the year 8,786 which is over 6,000 years later.

(The above story first appeared on LatestLY on Jul 15, 2020 02:52 PM IST. For more news and updates on politics, world, sports, entertainment and lifestyle, log on to our website latestly.com).