Comet NEOWISE to Be Visible in India From Today For 20 Days: How and Where to Watch The Rare C/2020 F3 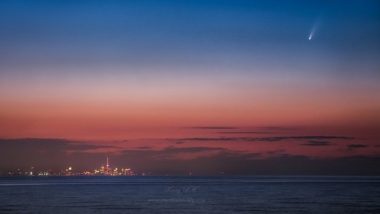 Skywatchers are sure to have more reasons to keep a close eye on the skies. A new comet called C/2020 F3 NEOWISE discovered by NASA's Near-Earth Object Wide-field Infrared Survey Explorer telescope, will be clearly visible to the naked eye on July 14. NASA astronaut Bob Behnken had posted a tweet last week from International Space Station last week with a picture of the comet shining brightly near the curve of Earth. Dr Subhendu Pattnaik, Deputy Director of Odisha’s Pathani Samanta Planetarium said that people in India will be able to see the comet for around 20 minutes every day for 20 days from today.

NEOWISE which was discovered by NASA’s Near-Earth Wide-field Infrared Survey Explorer (NEOWISE) telescope in March, is expected to come closest to Earth on July 22-23. However, it will be visible in the north-western sky from today onwards. Pattnaik said, "From July 14, C/2020 F3, a comet discovered on March 27, will be clearly visible in the north-western sky. It will be visible after sunset for around 20 minutes for the next 20 days. People can observe it from naked eyes." He added, "In the evenings to follow, the comet will rapidly climb higher in the sky and will be visible for a longer period." Rare Comet NEOWISE Shines Brightly Up Above! See Dazzling Pictures of C/2020 F3 Captured From International Space Station.

How And Where to Watch NEOWISE Comet?

The comet will appear low in the northwest sky (20 degrees from the horizon) on July 14. Around July 30th it will be visible near Ursa Major (Saptarshi Mandal) at an altitude of 40 degrees be visible for an hour. NASA explained that the comet can best be viewed as an evening object from mid-July onwards. You can see it using a pair of binoculars. However, after July it will fade away quickly and will not be visible to the naked one. To see the spectacular celestial event, you can choose a dark night sky away from city lights where it would be clearly visible.

Comet NEOWISE and the city of Toronto, Ontario, Canada 🍁! I was up really early for this shot. It's not often that we get the opportunity to see or photograph a comet of this brightness and with a tail. I hope you like it!🤩 https://t.co/BFyxFFw2DE pic.twitter.com/sGZBiEVryM

NEOWISE came through space nearly 200 million kilometres away from the Earth. On July 22, it will be closest to our planet at a distance of 64 million miles or 103 million kilometres while crossing Earth's outside orbit. According to NASA, the comet is about 5 km wide and its nucleus is covered with sooty dark particles leftover from its formation near the birth of our solar system around 4.6 billion years ago. This comet will be visible from Earth next time only in the year 8,786 which is over 6,000 years later.

(The above story first appeared on LatestLY on Jul 14, 2020 01:35 PM IST. For more news and updates on politics, world, sports, entertainment and lifestyle, log on to our website latestly.com).