Three Super-Massive Black Holes Merging Together in Our Nearby Universe, Discovered by Indian Researchers

Indian researchers have discovered three supermassive black holes from three galaxies merging together to form a triple active galactic nucleus, a compact region at the center of a newly discovered galaxy that has a much-higher-than-normal luminosity. 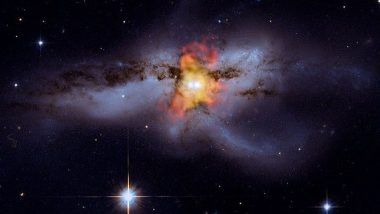 Indian researchers have discovered three supermassive black holes from three galaxies merging together to form a triple active galactic nucleus, a compact region at the center of a newly discovered galaxy that has a much-higher-than-normal luminosity. This rare occurrence in our nearby Universe indicates that small merging groups are ideal laboratories to detect multiple accreting supermassive black holes and increases the possibility of detecting such rare occurrences.

Supermassive black holes are difficult to detect because they do not emit any light. But they can reveal their presence by interacting with their surroundings. When the dust and gas from the surroundings fall onto a supermassive black hole, some of the mass is swallowed by the black hole, but some of it is converted into energy and emitted as electromagnetic radiation that makes the black hole appear very luminous. They are called active galactic nuclei (AGN) and release huge amounts of ionized particles and energy into the galaxy and its environment. Both of these ultimately contribute to the growth of the medium around the galaxy and ultimately the evolution of the galaxy itself. Astronomers Find a 'Break' in One of Milky Way's Spiral Arms: NASA. 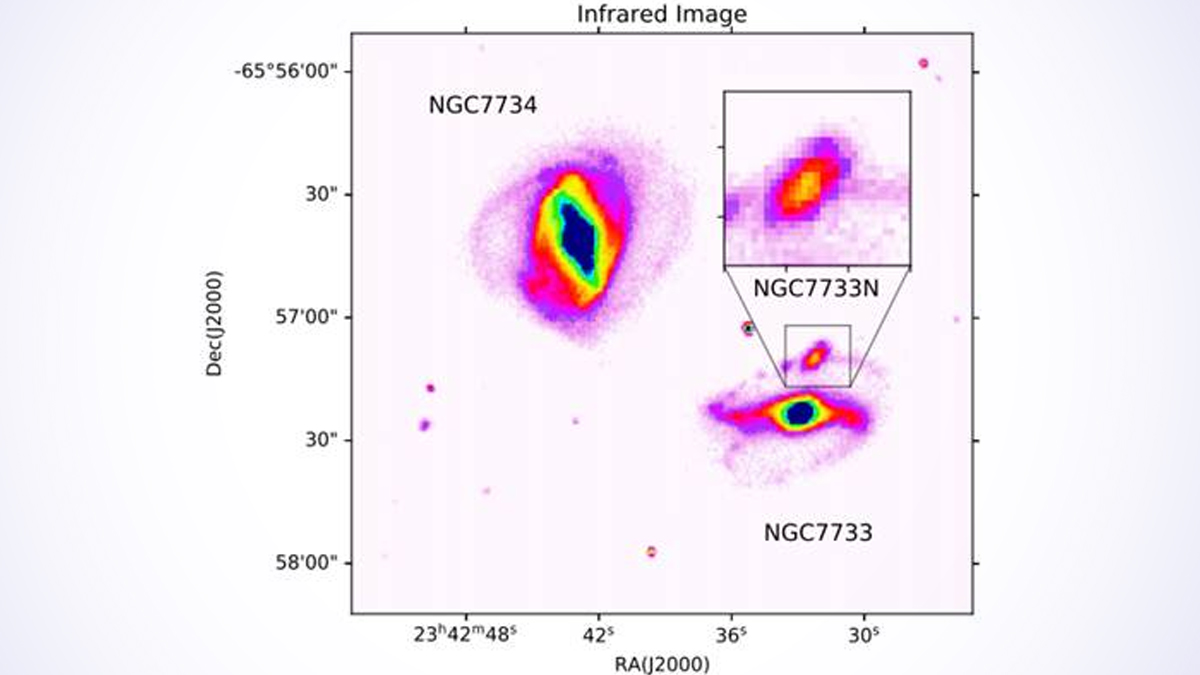 A team of researchers from the Indian Institute of Astrophysics consisting of Jyoti Yadav, Mousumi Das, and Sudhanshu Barway along with Francoise Combes of College de France, Chaire Galaxies et Cosmologie, Paris, while studying a known interacting galaxy pair, NGC7733, and NGC7734, detected unusual emissions from the centre of NGC7734 and a large, bright clump along the northern arm of NGC7733. Their investigations showed that the clump is moving with a different velocity compared to the galaxy NGC7733 itself. The scientists meant that this clump was not a part of NGC7733; rather, it was a small separate galaxy behind the arm. They named this galaxy NGC7733N. Mesospheric Ozone Layer Depletion Explained by Researchers.

This study, published as a letter in the journal Astronomy and Astrophysics, used data from the Ultra-Violet Imaging Telescope (UVIT) onboard the first Indian space observatory ASTROSAT, the European integral field optical telescope called MUSE mounted on the Very Large Telescope (VLT) in Chile and infrared images from the optical telescope (IRSF) in South Africa.

The UV and H-alpha images also supported the presence of the third galaxy by revealing star formation along with the tidal tails, which could have formed from the merger of NGC7733N with the larger galaxy. Each of the galaxies hosts an active supermassive black hole in their nucleus and hence form a very rare triple AGN system.

The IIA team explains that if two galaxies collide, their black hole will also come closer by transferring the kinetic energy to the surrounding gas. The distance between the blackholes decreases with time until the separation is around a parsec (3.26 light-years). The two black holes are then unable to lose any further kinetic energy in order to get even closer and merge. This is known as the final parsec problem. The presence of a third black hole can solve this problem. The dual merging blackholes can transfer their energy to the third blackhole and merge with each other.

Many AGN pairs have been detected in the past, but triple AGN are extremely rare, and only a handful has been detected before using X-ray observations. However, the IIA team expects such triple AGN systems to be more common in small merging groups of galaxies. Although this study focuses only on one system, results suggest that small merging groups are ideal laboratories to detect multiple supermassive black holes.

(The above story first appeared on LatestLY on Aug 27, 2021 11:54 AM IST. For more news and updates on politics, world, sports, entertainment and lifestyle, log on to our website latestly.com).