Two new species of small-colony-forming ants have been discovered in the forests of Mizoram for the first time. The new species of the ant genus Myrmecina Curtis were discovered by a team of researchers from the Ashoka Trust for Research in Ecology and Environment (ATREE), Bengaluru. 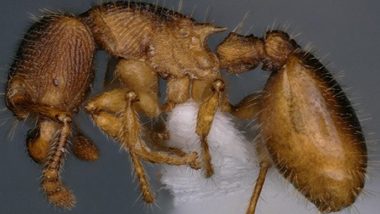 Two new species of small-colony-forming ants have been discovered in the forests of Mizoram for the first time. The new species of the ant genus Myrmecina Curtis were discovered by a team of researchers from the Ashoka Trust for Research in Ecology and Environment (ATREE), Bengaluru.

The two species found, Myrmecina Bawai and Myrmecina Reticulata have been reported for the first time from Mizoram, according to the study published on the ATREE website.  596 New Species of Plant and Animals Discovered in India in the Year 2018.

Earlier in January 2021, two new species of a rare ant genus Ooceraea were found in Kerala and Tamil Nadu. They differ from others of the same genus based on the number of antennal segments.

Around the world, there are 56 species and a subspecies distributed in the Australia, Nearctic, Oriental and Palaearctic regions.

Myrmecina bawai, one of the species found in the State, has a yellow-coloured hairy body with a dark tinge. It also has small eyes and erect hair in different parts of the body. While, Myrmecina reticulata, the other species, is black and brown in colour, and has a unique reticulate sculpture on its abdomen. These ant species live in hidden habitats, under stones, decaying woods and leaf litters

Myrmecina bawai has been named after Kamaljit S Bawa, ecologist and founder of ATREE. New species are usually named after some distinguishing attribute or location but are often named after scientists to honour their research contributions to biology, especially in the fields of evolutionary and organismal biology, ecology, or systematics.

The research was conducted in Mizoram as part of Bioresource and Sustainable livelihoods in North East India supported by the Department of Biotechnology.

For research, the team led by Priyadarsanan Dharmarajan laid out pitfalls and wrinkler traps (soil extraction) in the Phawngpuri National Park and the Dampa Tiger Reserve. According to him, Myrmecina being cryptic ants, are rarely encountered in visual surveys and their biology and behaviour are poorly known.

The team said in a statement that they found Myrmecina bawai in a shaded region at an elevation of 1619 m above sea level.

According to a 2016 study on the distribution of ants in the Indian States, published in the journal ZooKeys, there are a total of 828 valid species and subspecies belonging to 100 genera grouped in 10 subfamilies. In terms of species richness, the subfamily Myrmicinae is the most speciose (354 species) followed by Formicinae (241 species), Ponerinae (111 species), Dorylinae (55 species) and Dolichoderinae (30 species, 3.6%), while the rest of the smaller subfamilies together constitute 4.2% (Pseudomyrmecinae 11 species, Amblyoponinae 10 species, Proceratiinae 6 species, Ectatomminae 5 species and Leptanillinae 4 species).

Ants are an important part of the ecology as they are not only one of the greatest hard workers but are also necessary for pollination, making soil fertile and more.

(The above story first appeared on LatestLY on Jun 29, 2021 06:54 PM IST. For more news and updates on politics, world, sports, entertainment and lifestyle, log on to our website latestly.com).