Video of Water Beetles Escaping Alive out of a Frog's Butt After Being Swallowed Is Going Viral! Here's What New Study Has to Say About Evolution in Prey Animals 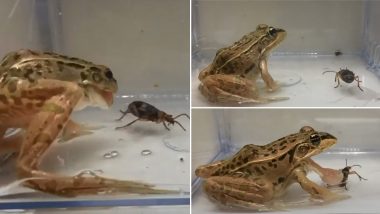 It shows the Pelophylax nigromaculatus frog gulping down the beetle, which in turn survives inside the frog's body by swimming through the frog's digestive tract. Later it is seen that the beetle makes its way alive through the anus of the frog while it poops.   Sugiura revealed that 93 percent of the beetles fed to a frog during the study escaped the frog's "vent" (anus) within four hours, "frequently entangled in fecal pellets."

Sugirua also revealed that the quickest beetle escape was six minutes which is quite a shocker! The reason behind this is being said to be the evolution of the aquatic beetle that has become a better swimmer by  "kicking its legs and can breathe underwater by trapping a small pocket of air under its wing covers" this is also being said to be the reason the beetles survive inside a frog's intestines.

A research article called, "Anti-predator defences of a bombardier beetle: is bombing essential for successful escape from frogs?" says, "Some animals, such as the bombardier beetles (Coleoptera: Carabidae: Brachinini), have evolved chemical defences against predators. When attacked, bombardier beetles can discharge noxious chemicals at temperatures of approximately 100 °C from the tip of their abdomens, “bombing” their attackers."

(The above story first appeared on LatestLY on Aug 05, 2020 01:50 PM IST. For more news and updates on politics, world, sports, entertainment and lifestyle, log on to our website latestly.com).