Australian PM Scott Morrison Moves Back as Local Shouts 'Get Off The Grass' During Press Conference, Watch Video 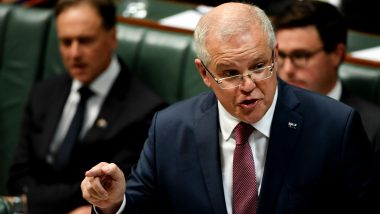 Canberra, June 4: A media conference by Australian Prime Minister Scott Morrison was briefly interrupted after a local asked the group to move from his newly-reseeded lawn. A video of the incident is going viral on social media. Scott Morrison was making announcements at a housing construction site in Googong when he was told to get off the lawn. Morrison obliged along with reporters. Scott Morrison Makes Samosas And Mango Chutney at Home, Wants to Share 'ScoMosas' With PM Narendra Modi (Check Pics).

"Can everyone get off the grass please," an unnamed local shouted at Morrison when he was announcing the package to support the "Australian dream" of homeownership. "Come on, I've just reseeded that," the local further shouted. Morrison chose to stand on a nature strip to make announcements. Hence, reporters and photographers and camera operators had to swarm back and on to the adjoining lawn.

Watch: Get Off The Grass, Australian PM Scott Morrison Told

‘Get off the grass!’ Australian Prime Minister Scott Morrison told to move on during stimulus announcement https://t.co/Mnt7YDjz0r pic.twitter.com/gvzMRqwtZW

After the man's "command", Morrison backed away, saying: "Sure... Let's just move back from there. Please, off the thing." The Australian PM's announcements were for construction sector hit hard by the coronavirus pandemic. As the press conference wrapped up, Morrison joked to reporters: "Make sure you get off that bloke's lawn," reports ABC News.

(The above story first appeared on LatestLY on Jun 04, 2020 05:51 PM IST. For more news and updates on politics, world, sports, entertainment and lifestyle, log on to our website latestly.com).