Avifavir, COVID-19 Drug That Russia Claims to be 'Game Changer', to be Rolled Out Next Week

Kirill Dmitriev, head of Russia’s RDIF sovereign wealth fund, claimed that the drug would be administered on about 60,000 patients by Russian hospitals from June 11 onwards. The drug is capable of curbing the rate of transmission and can kill the virus in an infected person's body in 10 days. 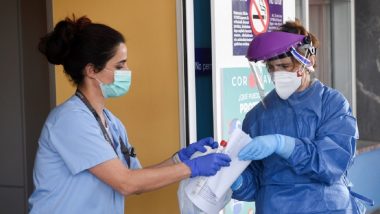 Moscow, June 1: Avifavir, originally known as faripiravir developed by Japan, will be rolled out by Russia for use on COVID-19 patients. Being promoted as a "game-changer" drug, Moscow is hopeful that Avifavir can significantly expedite the period of recovery for coronavirus patients. The drug, say officials, will allow Russia to end the weeks-long lockdown as it may reduce the lethal effect of virus causing COVID-19. Vaccine Development Moving Positively, Next One Month Crucial: Bharat Biotech.

Kirill Dmitriev, head of Russia’s RDIF sovereign wealth fund, claimed that the drug would be administered on about 60,000 patients by Russian hospitals from June 11 onwards. The drug is capable of curbing the rate of transmission and can kill the virus in an infected person's body within 10 days.

RDIF, a financial backer of the state, has so far shared 50 percent of the cost with the drug's manufacturer ChemRar. Dimitriev, while sharing the details with Reuters, said the costing was significantly reduced due to the groundwork research done by Japan.

An overall expenditure of 300 million roubles ($4.3 million) has so far been incurred, Dmitriev said. The trials were mostly successful and no adverse side-effects of the drug was found.

“The drug showed very good results in randomised clinical tests. After four days, 65 percent of patients did not have the virus,” he said, adding that some countries in the Middle East and Latin America have reached out to Moscow to import the drugs after its mass production begins.

Japan, where Prime Minister Shinzo Abe has allotted $128 million in government funding towards developing favipiravir into a COVID-19 drug, is yet to find success so far. For Tokyo, the drug had proven to be game-changer in the fight against influenza and other RNA viruses.

Russia, with over 4,14,000 cases of coronavirus, is the third worst-affected countries across the world due to COVID-19. Despite the high number of cases, the relatively low deaths - 4,855 - has been a subject of debate. While Moscow has linked it to the country's robust health infrastructure, conspiracy theorists have accused the Vladimir Putin regime of fudging the numbers.

(The above story first appeared on LatestLY on Jun 02, 2020 12:06 AM IST. For more news and updates on politics, world, sports, entertainment and lifestyle, log on to our website latestly.com).