Israeli Prime Minister Benjamin Netanyahu, while addressing an event said, "women are animals with rights." His comment has stirred a controversy and is receiving worldwide criticism. Netanyahu's office, however, later clarified that the PM was just giving an example and had no intention to compare women with animals. 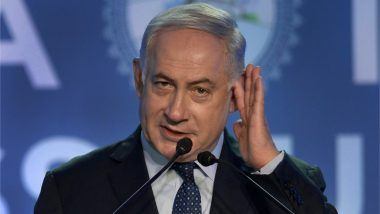 New Delhi, November 25: Benjamin Netanyahu, the Prime Minister of Israel,  stirred a controversy while addressing a conference at the Knesset, country's legislative body, when he called the women as "animals with rights." He has been facing criticism worldwide on his comments. Netanyahu was speaking at the event organised to mark the 'International Day for the Elimination of Violence Against Women.' Benjamin Netanyahu Secretly Visited Saudi Arabia, Met Crown Prince Mohammed bin Salman: Report.

The Israeli Prime Minister said, "Women aren’t animals that you can beat, and today, we say you don’t hit animals either. We understand that animals, too, have the understanding and intelligence and cognition and feelings. We rightly have compassion for animals. Well, women are animals, children are animals – with rights."Israeli PM Benjamin Netanyahu, Abu Dhabi Crown Prince Mohammed bin Zayed Nominated for 2021 Nobel Peace Prize.

His office, however, later said that Netanyahu's comments were taken out of context and that he used it animal abuse just as an example without intending to compare the two. "Prime Minister Netanyahu, who spoke from the bottom of his heart today about women's rights and against any violation of them, only gave an example of abuse in a small part of his speech when he also spoke about harm to animals, but in no way intended to compare them," Israel's PMO said in a statement, as reported by the Jerusalem Post.

(The above story first appeared on LatestLY on Nov 25, 2020 09:39 AM IST. For more news and updates on politics, world, sports, entertainment and lifestyle, log on to our website latestly.com).