COVID-19 Global Tally Surges Past 20 Million, According to Reuters Tally and Worldometers Tracker 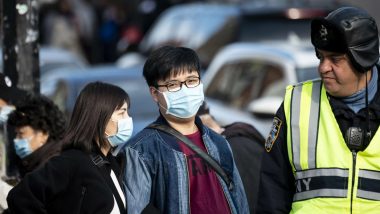 New Delhi, August 10: The worldwide tally of coronavirus infections surged past the 20 million-mark, according to a Reuters tally and the Worldometers tracker. The John Hopkins University (JHU) was, by the time this report was published, yet to report more than 2,000,000 cases. The fatality count also differed as per the three major trackers.

The John Hopkins global COVID-19 map, which has gained larger credibility among a section of experts, pegged the worldwide tally of infections at 19,936,547, by the this report was published.

On deaths, Reuters claimed that the toll crossed 728,000 on Monday. The Worldometers recorded 736,052 global fatalities by the time this report was published, whereas, the JHU count of deaths was 732,284.

The worldwide recovery rate hovers between 66 to 68 percent, with the Worldometers tracker noted that a total of 12,989,262 patients have been cured of the disease. The JHU and Reuters did not report an exact tally on recovered cases.

Among all countries, the United States continues to remain the worst-affected in the world. In terms of both - caseload and fatality count - US continues to top the charts. The tally of COVID-19 infections has crossed 5 million-mark, nearly one-fourth of the global count. Over 163,000 deaths were recorded so far.

(The above story first appeared on LatestLY on Aug 10, 2020 11:50 PM IST. For more news and updates on politics, world, sports, entertainment and lifestyle, log on to our website latestly.com).