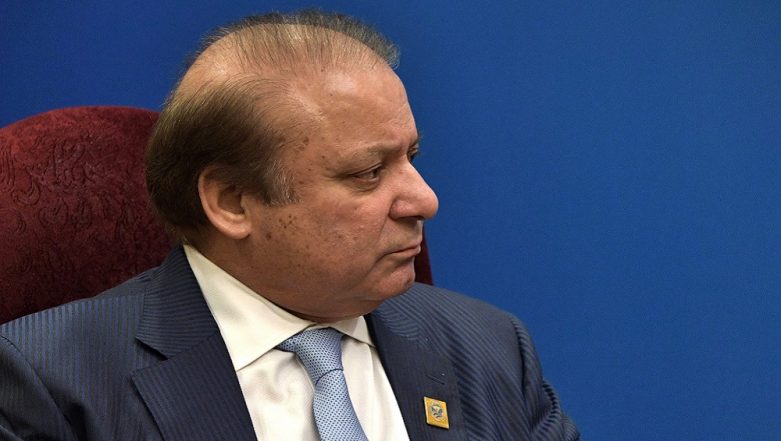 Lahore, December 25: Pakistan's former Prime Minister Nawaz Sharif was shifted on Tuesday from a prison in Rawalpindi to the Kot Lakhpat Jail in Lahore, where he will serve the seven-year prison sentence handed to him for corruption a day earlier.

Fazeel Asghar, Home Secretary of Punjab province, told Geo News that a B-class room was readied for Sharif at Kot Lakhpat Jail with a TV set, bed, blanket, heater, a chair and table. He was provided a helper and will also be allowed food from home.

Asghar said the 68-year-old Pakistan Muslim League (Nawaz) leader would be placed in the same compound as his brother, Shehbaz Sharif, also sentenced for corruption, although they would be in different cells.

He added that instructions were issued to ensure strict security measures in the jail and anyone who indulged in vandalism will be booked under terrorism charges. Ex-Pakistan PM Nawaz Sharif Sentenced to 7-Year Jail in Al-Azizia Case, Acquitted in Flagship Reference.

A judge of the National Accountability Bureau, Pakistan's anti-corruption body, sentenced Sharif to seven years jail and imposed a fine of $2.5 million on him on Monday after ruling that Al-Azizia Steel Mills -- a Saudi Arabian firm carrying the name of his son -- belonged to the former Prime Minister, who was unable to demonstrate how the project was funded.

At the same time, the judge found him innocent in another case of alleged corruption concerning the Flagship Investments firm in the UK for lack of evidence.

The trial against the Sharifs commenced on September 14, 2017 after Pakistan's anti-corruption body filed three cases relating to the Avenfield properties case, Al-Azizia Steel Mills and Flagship Investment Limited on the Supreme Court's directives in the landmark Panamagate verdict.

Sharif, his daughter Maryam Nawaz and son-in-law Muhammad Safdar were sentenced to 10 years, seven years and one year in prison, respectively by the same court in July in the Avenfield case -- ownership of four luxury flats in London. They later bailed on appeal when the Islamabad High Court suspended their sentence in September.

In July 2017, Pakistan's Supreme Court had ousted Sharif as Prime Minister and barred him from public office for life after an investigation spurred by the publication of the Panama Papers found that he failed to disclose payments from a company belonging to his son.