Many countries including Turkey, Iran, Pakistan among others have strongly criticised French President Macron's plan to "save France's secular values" against "Islamist radicalisation," calling it anti-Islamic and Islamophobic. anti-France protests were organised in various nations and Turkey called for boycott of France. 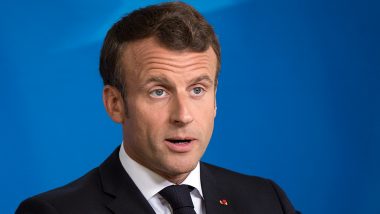 New Delhi, October 28: France has been facing heat from several countries around the world, ever since its President Emmanuel Macron said, “Islam is a religion that is in crisis all over the world today, we are not just seeing this in our country,' while presenting a  plan to defend "France’s secular values" against the “Islamist radicalism,” in Paris on October 2. He also vowed to present a bill to strengthen a law that officially separated church and state in France in December.

On October 16, Samuel Paty, a middle school teacher in France was beheaded, after he showed a caricature of Prophet Mohammad, published by Charlie Hebdo, in his class on freedom of expression. On Friday, the cartoons were projected onto government buildings in France. 'I Stand with France' Trends in India as Emmanuel Macron Faces Outrage from Pak, Turkey Others.

Politicians and leaders of several countries are becoming increasingly critical of Macron's remarks on Islam, terming them as Islamophobic and an attack on the religion. Various Islamic nations including Iran, Pakistan, Turkey stormed out at France over its anti-Islamic behaviour. Many took to social media to express their concern over what is happening in France.

Why is #BycottFrance Trending? Watch The Video Here:

Javad Zarif, Foreign Minister, Iran took to Twitter and  said: “Muslims are the primary victims of the ‘cult of hatred’ – empowered by colonial regimes & exported by their own clients. Insulting 1.9B Muslims- & their sanctities – for the abhorrent crimes of such extremists is an opportunistic abuse of freedom of speech. It only fuels extremism.” Iran's foreign ministry said that it rejected “any insult and disrespect to the Prophet of Islam…, and Islam’s pure values of Islam by any person regardless of their position”, according to local media.

Pakistan's Prime Minister Imran Khan in a letter to Facebook CEO Mark Zuckerberg sought a ban on Islamophobic content, similar to the website’s measures against Holocaust deniers. On Wednesday, Pakistan’s National Assembly asked the government to recall their ambassador in France. Earlier this week the Pakistan's Foreign Ministry had summoned the French ambassador in Islamabad to complain about Macron’s comments.

Turkey also criticised the comments of the French President in strong words, with the Turkish President Recep Tayyip Erdogan suggesting Macron to undergo a mental health check-up. Erdogan also called on Turks to boycott French products amid an escalating dispute over Paris’s support for the right to caricature Prophet Muhammad. 'Don't Mess With Turkey': Erdogan vs Macron War of Words Sharpen; 10 Points On The Mediterranean Crisis.

Jordan‘s Islamic Affairs Minister Mohammed al-Khalayleh said that “insulting” prophets was “not an issue of personal freedom but a crime that encourages violence.”  The Lebanon Hezbollah condemned the “deliberate insult” to the Prophet. Morocoo and Saudi Arabia also condemned Macron's remark on Islam. Anti-France protests are being orgainsed in Libya, Gaza, Iran and Syria among others.

(The above story first appeared on LatestLY on Oct 28, 2020 08:03 PM IST. For more news and updates on politics, world, sports, entertainment and lifestyle, log on to our website latestly.com).